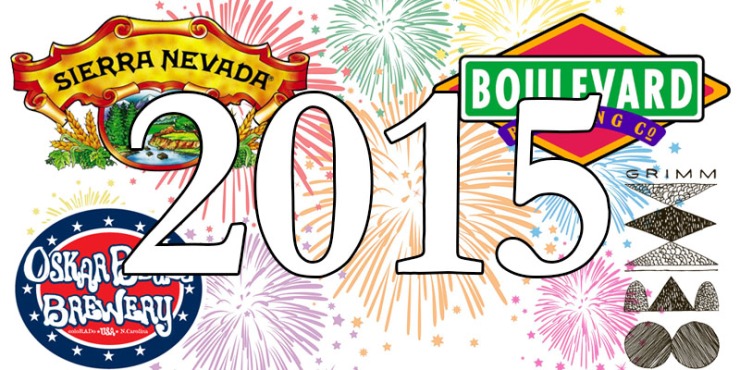 About a week into the New Year and I can only assume we’re all so over 2015.

It’s time for a fresh start with new goals, attitudes and beers, of course. With beer aisles brimming with choices like never before, it’s easy to get caught up in the latest 2016 release even though there were so many great options we probably missed last year.

Which is why it’s also time to briefly look backward.

For the second year, I’ve worked to determine the “best” beers of a year gone by. For all the subjectivity that goes into creating lists to rank our favorite movies, TV shows and more, I’m trying to find some objective consensus to provide a clearer view of what pleased the palate of drinkers and brewers across the country.

To do this, I found a collection of 16 “best beer” lists from a variety of sources, from blogs to newspapers and prominent magazines. Criteria for selection was simple: a list had to focus on 2015 releases (new beers or new, annual brews) with a preference toward a wide geographic representation. There are more city/state best beer lists than we could shake a pint glass at.

That left me with an eclectic group of lists, ranging from three to 25 beers. In all, there were 193 total beers to analyze with a handful of beers vying for best of 2015.

We’ll start with a macro look at the data, first focusing on breweries.

(As an obvious note, please take this with an obvious boulder of salt. There are lots of amazing breweries that certainly aren’t represented in these lists, including your personal favorite from down the road.)

King Gambrinus Award for Brewery of the Year: Sierra Nevada

And it’s not even close.

Chico, California’s pride and joy had beers named nine times across six lists, but most impressive was the variety:

But this doesn’t even paint the picture of what kind of year it was for Sierra Nevada. Aside from being the brewery with the most-cited beers across researched lists, Hop Hunter and Nooner pilsner were the #1 and #3 best-selling new craft beers in the country. (#1 and #2 if you want to discount Blue Moon White IPA.)

All this doesn’t even consider the powerhouses that are Pale Ale and Torpedo, which are both among the top-five selling craft beers overall. Torpedo saw a sales bump of 12 percent nationwide in 2015. Pale Ale was at nearly 6 percent.

And you might have heard about their new East Coast facility opening up, too.

Boulevard did two things right in 2015 to get three beers across five lists: use of hops and sweet flavors, prevailing trends for American drinkers. Those beers were:

Shandies/Radlers were very popular this past summer and we all know the power of the IPA. The Calling, Boulevard’s double IPA, was named three times in my lists.

It seems most people don’t often talk about Oskar Blues, but the Colorado/NC brewery certainly got people to pay attention in 2015.

Oskar Blues was actually named to more lists (seven) than Boulevard, but for just two beers, their Pinner session IPA and Death By Coconut, which if not for the craze of hard sodas, may take the cake as the most beloved sweet beer of the fall/winter, if these lists are to be believed.

For what it’s worth, I wrote in March about why we should be paying attention to Oskar Blues.

Everyone’s A Prognosticator Award for Brewery to Watch: Grimm

This “brewery” technically hails from New York City, but it’s actually nomadic brewers Joe and Lauren Grimm, who have built a fan base with single-batch, limited-edition beers. Styles represented on 2015’s lists included two wild ales, a gose, saison and imperial stout. The flexibility allowed by their gypsy brewing style allows for plenty of ways to approach their craft. Grimm had five different beers on five different best beer lists.

Their availability may be sporadic depending on where they brew and who they brew with, but I did see them once in North Carolina in 2015.

Learn more about Grimm in this feature from Good Beer Hunting.

Of special note was Brooklyn’s Other Half, which has created a ferocious following among lupulin lovers. Other Half had five beers mentioned on “best beer” lists and any brewery that does IPAs well is going to get attention. Larry Koestler of BeerGraphs had this to say about Other Half: “…there was literally nothing else in the marketplace like OH’s magical series of single-hop-showcase cans in 2015.”

From what I gather, Other Half is one of those “must visit” breweries if you’re in NYC.

There were several other breweries cited multiple times across lists. At the top of the list was Stone, named seven times for five different beers: Bourbon Barrel Arrogant Bastard, Project Grainiac, Xocoveza, Delicious IPA, Sorry Not Sorry IPA. The only reason they wouldn’t be the overall “brewery of the year” is because their sales numbers couldn’t compare to Sierra Nevada. It’s an apples-to-oranges comparison, but know they are not a forgotten legacy brewery. It was a really impressive year for Stone in this regard.

Avery and Ballast Point both were named five times.

Tomorrow, we learn about the “best beers” we should’ve been drinking in 2015.

For reference, the lists from which I compiled data:

If you’ve got questions about my selection process or anything else regarding these lists, drop me a line on Twitter or email.