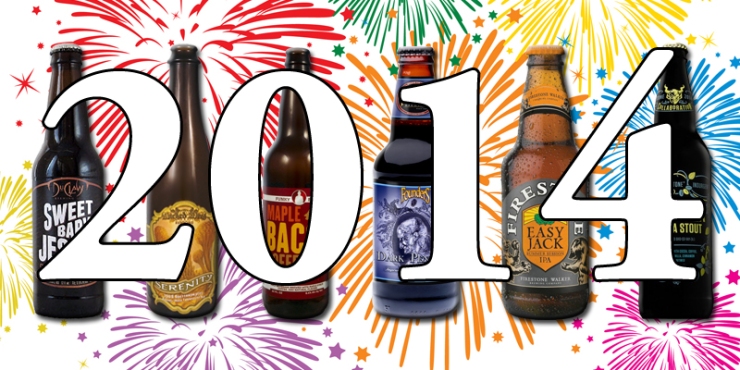 The flip of the calendar means many things: a fresh start, new resolutions and most important, an end to all those “best of 2014” lists.

Surely you’ve now read about where your favorite movies, TV shows, books, podcasts and celebrities rank in order of something wonderful or awful in 2014. But for the subjectivity that is necessary to form each of these, is there any kind of (slightly) objective consensus that can offer a clearer view?

This is particularly difficult when it comes to “best beer” lists of 2014 for two reasons:

But that doesn’t mean we can’t try to find 2014’s best beer or best brewery. In fact, it’s easier than you think.

Inspired by a recent post on FiveThirtyEight.com that sought to highlight critical consensus for “best of” lists, I’ve found a series of 2014 “best beer” lists from a variety of sources, from blogs to newspapers and prominent magazines like Wine Enthusiast and Draft Magazine.

Criteria for selection was simple: a list had to focus on 2014 releases (new beers or new, annual brews) and on widely regional or national distribution. There are more city/state best beer lists than we could shake a pint glass at.

That left me with 10 easily-found lists that ranged in ranking from seven to 25 beers. In all, there were 170 total beers to analyze.

To start, here’s the number of styles represented from the lists. For simplicity’s sake, I included beers like Founders The Dissenter (India pale lager) and Troegs Nugget Nectar (“American amber”) with IPAs. Stouts include all varieties like milk, imperial, etc. 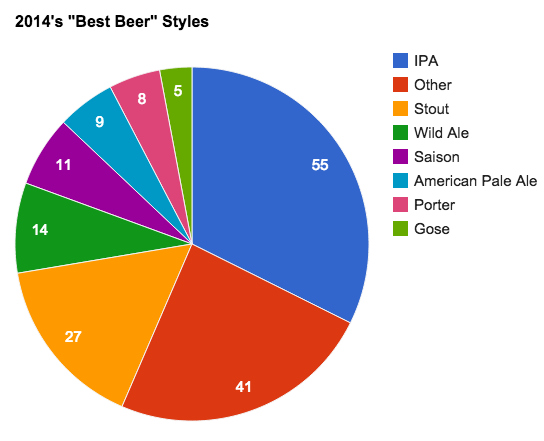 The “other” category includes a lot of styles with one or two showings: blonde, marzen, lambic, rauchbier, etc.

Please take this with an obvious boulder of salt. There are lots of amazing breweries that certainly aren’t represented in these lists, including your personal favorite from down the road.

That said, there are several breweries that stood out from the rest.

The Paso Robles, California-based brewery was the most cited in this analysis, with beers showing up eight times on seven different lists. Most impressive is the variety shown off by the brewery, which included five different styles:

Perhaps bringing home the award for “Most Americanized Portfolio” among the best beer lists is Founders, which was mentioned seven times across four lists. Why so American? Because their highly-regarded beers are either hopped to oblivion or a rare imperial stout, two favorites of the Red, White and Blue:

Others worth noting include Wisconsin’s New Glarus with three beers across four lists (Oud Bruin, Raspberry Tart and Scream) as well as Allagash (Saison/Farm to Face) and The Bruery (Black Tuesday/Mocha Wednesday), which were recognized four times.

Should we be surprised that one of the most-cited beers of all these lists is a Session IPA? Congrats to Firestone Walker’s Easy Jack, which was listed three times across these 10 lists, the same number of times as Founders’ Dark Penance (DIPA/black IPA), Stone’s Xocoveza Mocha Stout (imperial stout) and Allagash’s Saison.

Also worth noting is Ballast Point’s Sculpin, which was named three times, twice for its grapefruit variant.

Now, you’re probably thinking being named three times across 170 beers isn’t impressive, but you should consider that finding any commonality for these lists should be rare in the first place. While we can be subjective about the best movies and TV shows of 2014, we’re all still watching the same ones. There are literally thousands of options that could have been applied to these lists instead, so when we have a little over 140 different beers appearing across 170 total picks, it’s pretty good.

A few others that showed up two times:

A few fun notes from researching these numbers…

If you’d like to see for yourself, here’s the all 10 lists that were analyzed:

Questions? If there’s anything I didn’t cover, ask away below and I’ll try my best to answer from what I discovered!