I make no qualms about the purpose of this blog. The title is poking fun at the idea of hosting a beer blog – I’m not drunk when I’m producing content. I swear, mom. There’s a very real reason why I do this.

Part of that reason is my adoration for Dogfish Head, which launched what I assume will be a life-long love for all things beer. All the details are here, if you feel so inclined.

It’s a time for friends, but no time for check-ins. It’s a reason to be silly, but no reason to get stupid. It’s an opportunity to celebrate beer. For the third year in a row, that’s what a buddy and I did, this time accompanied by Friend of the Program Josh from Short on Beer, who also offers a recap on his blog.

This year’s trip wasn’t just to Dogfish’s Rehoboth Beach brewpub, as in year’s past. We put a new spin on the effort, turning it into a mini beer road trip. Fun abounds.

If you’re like me, the prospect of an all day beer road trip makes you all like…

But I swear things were much more organized. So off we go:

You may have heard of DuClaw, makers of the famous Sweet Baby Jesus peanut butter porter. I learned it’s kind of a big deal during our trip. I also learned the proper way to pronounce the brewpub’s location in Bowie (Boo-ee) which is not to be confused with Ziggy Stardust.

DuClaw was the site for an early lunch, offering an array of foods (somewhat minimal vegetarian options) but a list of 16 beers. We each had six samples. I’m sorry I can’t report on all 16, but my liver is not.

Some of them were pretty intense with ABVs over 10 percent, like this barleywine, which is apparently enough to make a man cry.

The  greatest trick the devil ever pulled was to convince the world a barleywine wouldn’t destroy you at 11 a.m. Or something.

Sweet Baby Jesus was amazing, with a solid mix of both peanut butter and chocolate that I’ve never found outside of a carefully constructed homebrew.

I really liked a blended beer called “Divine Retribution,” which was a 40/60 blend of DuClaw’s Retribution Imperial Stout and Misery Wheat Wine-Style Ale aged for six months in a charred Kentucky white oak bourbon barrel. It clocked in at 10.8 percent, but wasn’t overly intense in bourbon flavor. I likened it to a slightly toned down Bourbon County Stout – all the best flavors, but none of the burning.

All the other brews were solid, but not spectacular to make me remember them vividly outside of those two. Granted, we only put a dent into the whole tap list, so shame on us. All the same, a good start:

I wish I could say I loved Eastern Shore Brewing. I wish I took pictures of the bar area, which was adorably rustic with taxidermied animals and some kind of very old rifle on an awning. I wish I asked the name of the very friendly bartender who called everyone “friend” and was great with his service.

It’s just that I didn’t think the beer was that good.

Remember that lawsuit alleging AB InBev watered down their beer? That’s literally what Eastern Shore’s beers tasted like. We were served a flight of dark beers – scotch ale, black IPA, amber and two versions of a porter – one from a keg and one cask. In each instance, the beer was correct to style. It just literally tasted like someone splashed a touch of water in each glass.

As always, I highly recommend testing for yourself if you’re ever able, but something just felt off about the brews. I will say that the cask porter, flavored with cocoa nibs and vanilla beans, tasted like a s’more. A water-logged s’more. But a s’more nonetheless!

Flipside: they had a pretty awesome blow-off tube system.

Another plus: Eastern Shore has a sweet phone booth outside their brewery, so I guess if you’re into Doctor Who or whatever this would totally be your thing

All was made better with a stop at 16 Mile Brewing, however, which offered eight beers on tap, including Hot Fudge Sundae Stout. Because if you don’t want to eat your diary goodness, you might as well be able to drink it: 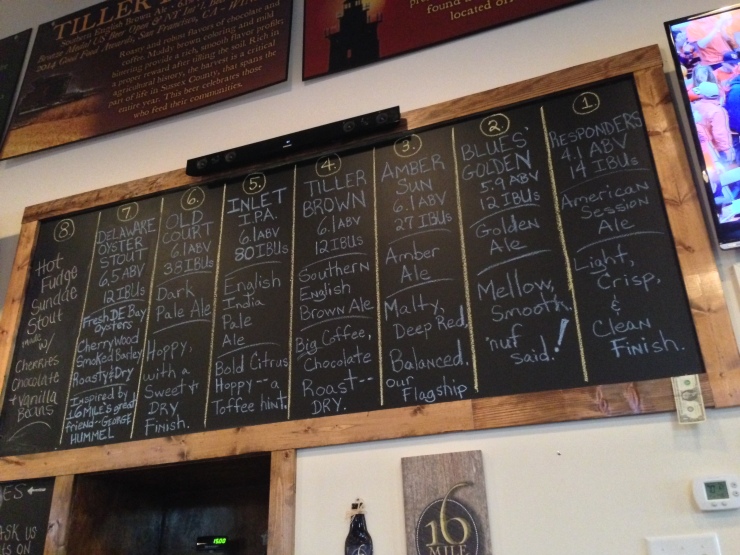 Peaking out of the corner you can see a TV screen, which distracted me with a Syracuse University basketball game. Between cheering for the Orange, which made me stand out wonderfully at a brewery in Delaware, and the friendly bar staff, 16 Mile seemed pretty legit.

If anything, 16 Mile was a solid no-frills brewery. Simple seating area with plenty of bar space and handy-dandy samplers for your flight: 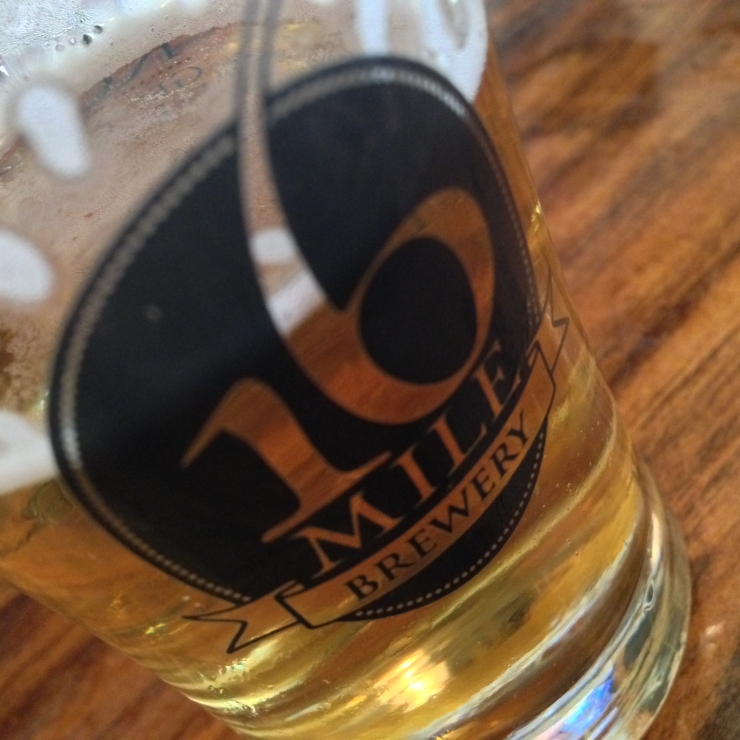 The brewery’s slogan, “Bold Session Beers,” sounds great, but applies more to flavors than ABV, as you can see on the chalkboard above. All but one of their beers on tap clocked in at roughly 6 percent ABV, which would certainly make DING‘s head explode if he knew what kind of artistic freedom us Yankees were taking with the holy creation of a session beer.

Even if the alcohol was pretty high for a “session” style, all of 16 Mile’s brews were perfectly tasty. I rather enjoyed the golden ale, which came across pretty crisp but with a slight hop bite at the end. I think all three of us also really liked their oyster stout, which was a great balance of roasted and smoked flavors that never got astringent. It made me happy as a clam.

16 Mile also had a badass fire pit that was lit as we were finishing up, so wafts of smoke came in through the door. Made me feel like a man – drinking beer, watching a fire and shouting at a TV because sports are on and of course the players and coaches can hear me.

WE’RE ALMOST THERE, I PROMISE.

Photo documentation becomes a little light at this point, because our eyes were on the prize. However, this may be the only image you need to see:

That’s the latest batch of World Wide Stout. I’ve had the beer several times before, but this 18 percent-ish ABV behemoth always comes off a little abrasive. It puts some hair on your chest. From the tap, however, it wasn’t nearly as harsh, but the alcohol content still makes it a sipper.

Other brews included the Wild Carrot Seed Ale, Brewdolf and Afternoon Snack, which was based on eating apples and peanut butter and because Dogfish Head. No Ancient Ales for me, though, so I can’t say I’ve got any special microorganisms from Egypt or Russia or the moon inside of me providing what I only assume are super powers. Thanks, Sam! 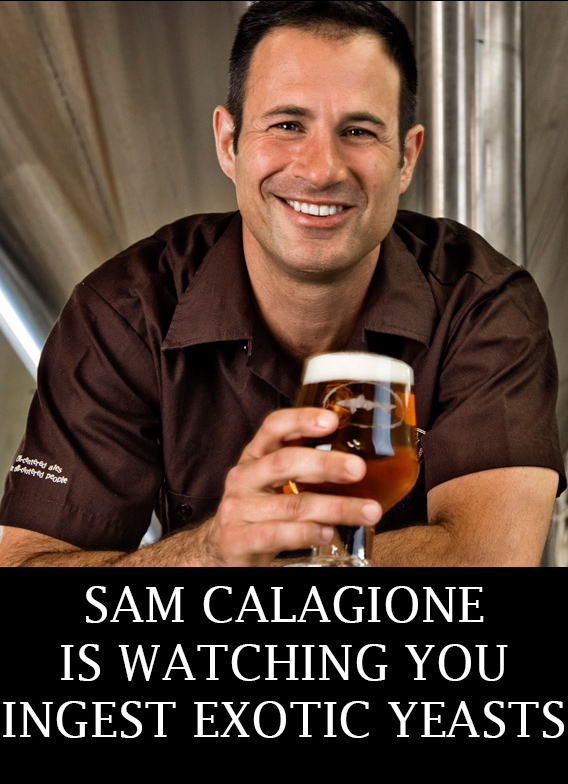 But seriously, folks, the Afternoon Snack was actually pretty good. The nuttiness of it was easy to taste. It didn’t strike me as peanut buttery as much as generic “seed or nut flavor,” however. The Brewdolf, styled after a Belgian golden, came with a cherry, which made me feel special!

Unfortunately, the evening did devolve into this:

But that’s just having good fun.

As always a good time was had. We even woke up the next morning no worse for the wear, so for that alone I’d say the trip was a success. If you’re interested, you can check out my much more abbreviated trip recaps from 2013 and 2012.

See you next year, Dogfish!

Show of hands – who’s been to the Rehoboth brewpub or any of these other stops? Thoughts? Suggestions? Tips? Asking for next year…

34 thoughts on “This is What Happens When You Visit Three Breweries and THEN Go to Dogfish Head: Beergrimage 2014”