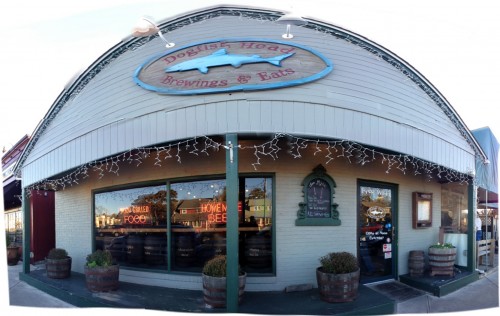 Beer itself may not be religious, but it’s certainly capable of causing a religious experience. (Or food, or sports, etc)

Hence, the beer pilgrimage. Or beergrimage.

Whether it’s Costa Rica or across the country or simply across your town, it’s a matter of finding a place that holds special meaning for you. For the past two years, my location has been the original Dogfish Head brewpub in Rehoboth Beach. Aside from Sam Caligione’s contributions to craft beer – which are many – Dogfish has always held a special place in my heart as the first brewery that really introduced me to how craft beer can push boundaries.

So this past weekend I packed up the car and headed north to spend a sudsy couple days (re)exploring my connection to the alcoholic concoction we love so much.

Last year’s trip to Dogfish was a lot of fun, highlighted by really friendly staff and the obvious collection of great beer. This year, my plan was to drink every beer on tap, either in a 4-ounce taster glass or a proper pint. That accounted for 17 different beers over a roughly seven-hour span my friend, Justin, and I spent there. Some highlights:

Noble Rot is better than it’s name
This farmhouse beer really hit a home run as a style I’ve been getting into lately. It’s got a touch of barnyard funk, but a good dose of grape sweetness tries to fend it off. Noble Rot uses must from grapes infected with botrytis fungus and a Belgian yeast (among other things) to give its distinct aroma and flavor, which will never really let you know it’s 9 percent ABV. Definitely not for everyone, but my favorite from the visit.

Things are better on draft…
It’s typically accepted that beer will taste better when it’s coming straight from its draft source – except for bottled Belgians, for example – but getting fresh Dogfish brews really showed off why this is true. The Palo Santo Marron tasted rather harsh, really emphasizing the beer’s ABV in lieu of raisins or fig sweetness you might find in a slightly aged bottle. Collaboration beer Province Ale Porter tasted fantastic, thanks to strong flavors of maple and molasses. Best of all, Chicory Stout burst of smoke, chocolate and espresso that could’ve been subdued by sitting on shelves.

…but even better on cask

A cask version of 75 Minute IPA poured solid straw gold and so hazy a lighthouse couldn’t shine through. The foam was a thing of beauty, like fluffy clouds dancing on top of the beer. Cask IPAs are among my favorite firkin-served beers, really helping to push the fruity flavors of hops and setting bitterness easily aside. The Cascade hops of this brew tasted amazing (tons of juicy grapefruit) and thanks to its natural carbonation and hand pump pour, the mouthfeel was velvety smooth.

For good measure, here’s the taster lineups from the visit:

Beergrimage Bonus
In addition to Dogfish, Justin and I stopped by DC Brau‘s brewery to try some samples. Citizen, a Belgian pale ale, was really good. It was malty and sweet, with typical Belgian yeast esters of banana and clove. Light spices helped to drive the beer’s flavor profile. Reviews of that and DC Brau’s IPA are forthcoming.

For good measure, I couldn’t leave Delaware (tax free!) or DC (local!) without picking up some bottles to take home, much to the chagrin of The Missus. I focused on local brews and out-of-state options that aren’t distributed to North Carolina. Any of these ring a bell with you? I’d love to hear what you think of them: 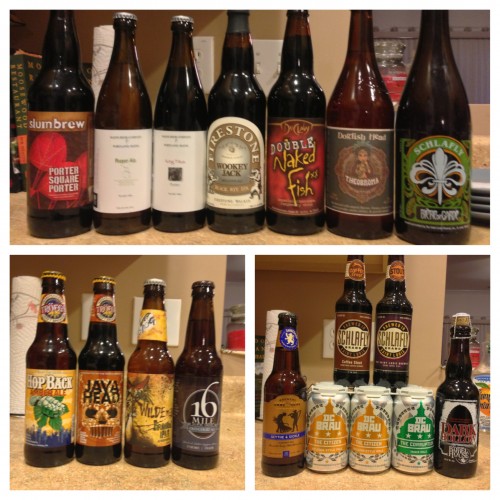 23 thoughts on “Out of Town – beergrimage”