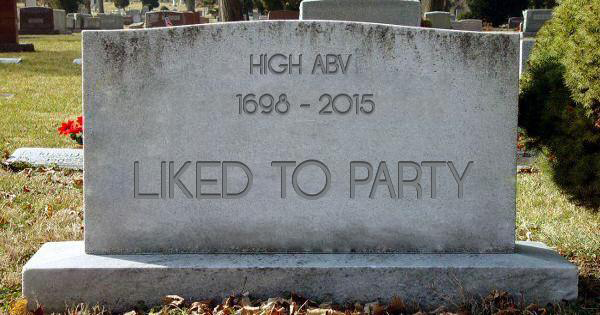 Or, at least, if you’re ready to buy into the latest publicized trend in beer by market research company Mintel, who noted the rise of high ABV beers in recent years. According to their estimate, just 6.6 percent of new beers globally were “high strength” in the early 2000s at an ABV above 6.5 percent. But in recent years, that’s jumped significantly:

Keep in mind those percentages reflect a global growth with new breweries opening nearly every day, so in America in 2013, it could be 25 percent of beers created by the 2,456 and then in 2014 it’s 23 percent from 2,917 breweries, per Brewers Association estimates.

“A potential backlash against this [high strength] trend is almost inevitable because there is far too much high ABV innovation happening,” said Jonny Forsyth, global drinks analyst for Mintel. “Beer remains fundamentally a volume and refreshment beverage and high ABV beers quickly take modern health-conscious consumers over the recommended limit.”

While it’s true beer’s success is partially driven by an opportunity for volume-based consumption, it feels a bit risky to contend that a backlash is on its way, especially when high-ABV beers are widely considered some of the best you can find. For example, look at the alcohol by volume of RateBeer’s top twenty-five best beers from their “Best Beer” lists covering 2006 to 2015:

Among the items RateBeer prides itself on is its global user base. Glancing at the website’s top user rankings, it’s easy to see that potential fans for these best beers are coming from all over.

So perhaps reports of high ABV’s death have been greatly exaggerated.

When discussing the prospect of an anti-ABV uprising, the most important thing to consider is if consumer interest is waning for beers that pack an extra punch. They aren’t.

Firstly, BeerGraphs research in 2013 showed higher ABV American pale ales, IPAs and DIPAs all scored higher than counterparts in their own style categories:

Even more so, Scott Janish found a correlation across 4.7 million reviews of about 91,000 beers on Beer Advocate, showing an upward trend in rating as ABV increased:

Of course, this is all in addition to my own research showing similar results and this unscientific survey highlighting drinker willingness to pay high prices for a special beer, which again, may often be high in ABV.

While it’s not beer, another avenue to consider is Bud Light’s “Rita” family, which, at 8 percent ABV, owns a third of the flavored malt beverage category and had dollar sales grow to almost $500 million from mid-2013 to mid-2014.

Across the board, for a slew of reasons business and personal, high ABV performs well. But does is this trend applicable to the global market?

Mintel is quick to point out that preference for high-ABV beers is waning in European markets among adults 18 to 24. But that still depends on cultural values and how we track interest.

There are plenty of reasons lower-strength beers have a place in the market – Sierra Nevada Nooner has helped craft pilsners thrive in the U.S. this year – but there will always be a place for Big Boys, if only for the sake of cellar-stashing INSATIABLE ANIMALS who seek out such experiences.

But we also have the shifting palate of drinkers, who have come to expect higher-strength options as beer markets grow and mature. The average American craft beer is 5.9 percent ABV, but most IPAs we’ll find, which make up a quarter of the craft sales market, clock in higher. Hell, Sam Calagione half-jokes that Dogfish Head will never need a session IPA because their 60 Minute IPA is that beer. At 6 percent.

So let’s hold off on that eulogy for now.