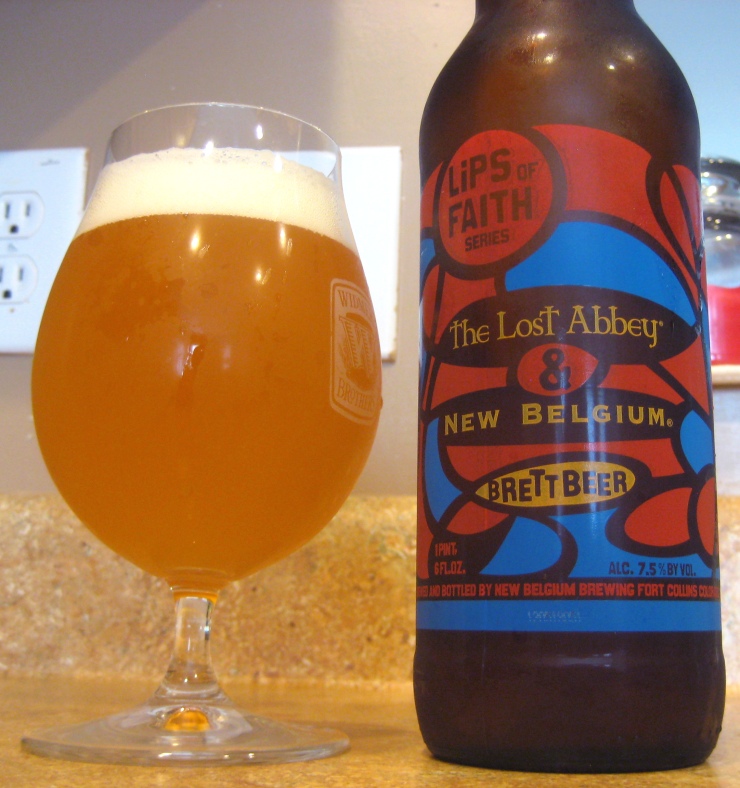 As soon as I opened the bottle, I could smell it.

As soon as I poured it into my glass, I could smell it from about a foot away.

No, this isn’t the Godfather of Funk … but it certainly could give George Clinton a run for his money. The New Belgium/Lost Abbey Brett Beer collaboration doesn’t just offer a unique beer with a human’s first name, it’s a beer-drinking experience I’m yet to find from anything else. This beer is bound to polarize – it’ got a 75 on Beer Advocate.

First, an obvious and important note: this beer was fermented with 100 percent Brettanomyces, a non-spore forming kind of yeast that lives on the skin of fruit in the wild and found in wood. If you’re really curious about Brettanomyces (“Brett,” for short), I recommend checking out a few different sites. For reference and further dramatic effect, the characteristics of this yeast strain consist of adjectives like barnyard, horse blanket or wet wool. So, yeah, this is kind of a weird beer.

Right after I poured the bottle, that smell that I could catch from a foot away only got stronger as I stuck my nose into my glass, immediately picking up … gym socks. But in a good way? What kind of S&M experience is this? All was OK though, because once I compartmentalized that aroma, I found pineapple, mango, and as the beer warmed up, sour cherry, peach and sour apple also came through. Whoa.

Oddly enough, the smell was the main attraction here. With the beer cold, its flavor reminded me of a European pilsner. It was surprisingly clean, crisp and easy drinking. Really not much to report. As the beer warmed, it took on notes of tropical fruit, including pineapple, and similar citrus of an orange. A pretty solid 180 from my initial sip. That said, I didn’t mind how bland the taste was compared to the smell of the beer, but it did leave me disappointed. The aroma certainly impacted some of my tasting, but the beer just lacked as many flavors as I had hoped for based on the smell alone.

I should reference all this back to a somewhat famous paper written by some fellow beer nerds that cover a similar experience. The way I view their findings is that brett can be polarizing because it can induce such a wide variety of reactions from different people. Where I was able to find fruit, others may find meat. One common conclusion from their findings was that their expectations weren’t necessarily met by brett-based beers. You may expect over-the-top funkiness in smell and taste, but that isn’t the case. Different palates, different outcomes.

Hit the jump for my “Rate That Beer” sheet.