Over on Good Beer Hunting, I wrote this week about Boston Beer’s latest financial report and some of its implications. Of note, I gathered some IRI data to help show changes in company sales structure that proved to be rather eye opening.

Among the variety of findings, this one stood out the most: in IRI-tracked spaces (grocery, convenience, big box, etc.) the Twisted Tea family of brands surpassed the collection of Sam Adams brands in year-to-date dollar sales. In fact, it’s been a long time coming.

Part of the challenge has been the decreased sales of flagship brand Boston Lager as well as the challenge of keeping interest in Rebel IPA. Both are still selling *millions* worth of six and 12-packs, but Boston Beer is a publicly traded company and these kinds of things get a bit awkward when success can’t be sustained.

Note this is *just* for packaged Boston Lager tracked through IRI stores off-premise, and this beer’s significant draft footprint most certainly buoys its decline seen here. 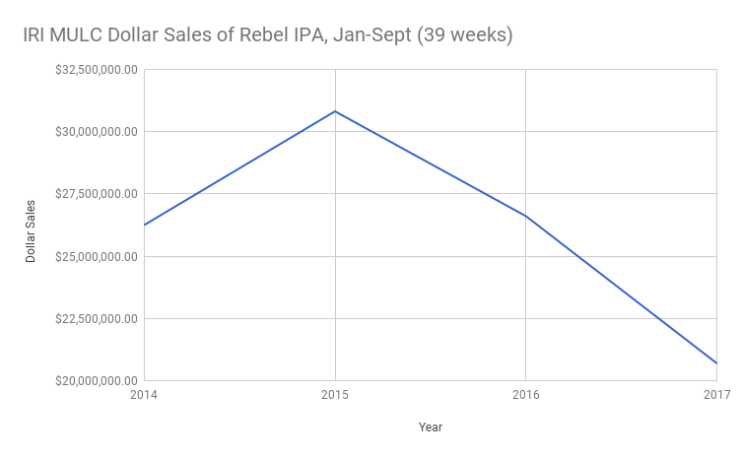 The same applies for Rebel IPA, which had the most profitable debut of a craft beer ever in 2014, and even built on that in 2015, and has declined since.

An odd time for a company that has “beer” in its name when its flavored malt beverages are really the ones showing the most energy at the moment. Maybe a New England IPA (really) and a rose (wine)-inspired cider (yes, really) will be a solution in 2018?

You can find more details in this story on Good Beer Hunting.