Over the weekend, the Brewers Association announced their annual list of winners from judging at the Great American Beer Festival, offering the best of American beer out of 7,923 entries across 98 categories.

Among the joy of all the winners, there was also some confusion. With 105 entries, Fruited American-Style Sour Ale was decided to not have one good enough for a gold. Session IPA awarded its top medal to a beer with 5.8% ABV. The first-place finisher for American-style IPA went to a beer its brewery does and does not list as a pale ale. Whoops.

Even if there are some confusing aspects of what was decided, there are still worthy numbers to crunch (and overanalyze).

To start, I pulled 10 of the most-entered categories from 2017. These were selected for having the highest number of entries but also being the most consistent in category description itself, as the BA has gone from 84 to 98 style categories in the last five years, dividing up and switching how some style categories are classified.

A note on the coffee beer category, of which I’ve previously covered extensively: this year it was split into two categories for the first time with “Coffee Beer” and “Coffee Stout or Porter.” Like the quirkiness of other categories mentioned above, this had a strange effect in that it didn’t really change anything. Of the six medals awarded between the two, five were milk stouts, with the lone holdout Alaskan’s Heritage Coffee Brown Ale, which won gold in the broader “Coffee Beer” category. The silver and bronze finishers in that section were both “golden” milk stouts.

Given that, I lumped all the coffee beer entries into one category, even though I realize not all beers entered were likely stouts or porters, however it does pique my interest how many entries were some version of those styles. Overall, the category of Coffee Beer is fascinating to me because it’s one of the most popular at GABF while always staying rather niche commercially. It’s easy to see when taking those 10 categories above and ranking them based on five-year growth trends:

Probably didn’t expect those top-three? The coffee beer selection may seem a bit out there, but for those of us who think a little too much about beer, the rapid growth of entries in the pilsner and kolsch categories aren’t a surprise as more enthusiasts talk about “sessionable” beers and the growth of lagers. But before we start declaring for the umpteenth time these beers are the “next IPA” (nothing is the “next IPA”), let’s please note that it can be part of the overall growth of the industry given the number of new breweries coming online, the number of those breweries who are creating beers to attract new (read: macro) drinkers, and act as a result of established breweries creating and entering judging. Not included here is Golden or Blonde Ale, which has gone from 69 to 126 entries over the 2013-2017 timespan.

In early 2016, BA economist Bart Watson noted: “Differentation is important in any niche, value-added market, because you need to give consumers a reason to pay more for your good than for a lower-priced good produced with greater scale.

All that said, there is also plenty to point at that the increase in GABF entries is also part of the overall growing trend of growth in these styles.

At the end of last year, Watson pointed out that golden, blonde, pilsner and pale lager categories represented just over 33% of BA-defined craft incremental growth in IRI-scanned data for the year. In 2016, craft pilsners grew 19.3% in dollar sales in IRI-tracked dollar sales, while golden ales (48.2%) and pale lagers (9.8%) also increased.

So while there are larger trends at play in relation to the potential popularity and creation of these styles/brands, it’s worth considering what details we may be able to take away from winning entries over the years.

For example, here are the top finishers in the German Kolsch category over the past five years:

For those familiar with the history and pedigree of Leinenkugel Brewing when it comes to German beers, its wins in 2013 and 2014 could be expected. What catches my eye, in a very basic way, is how the size and focus of winning breweries have changed. Geographically, 2016 shows that Colorado and the West Coast don’t have a stranglehold on the style, but there’s also a collection of breweries that specialize in lager (or in this case, lager-ish) beers as well as breweries who are more known for making big ales, like Solemn Oath. Perhaps this can connect with the above guess about breweries expanding their offerings by sake of growing as well as seeking broader customer interest.

In a minimal way, this also shows in recent history of the German Pilsner category.

Looking past Firestone Walker’s vice grip on medals, I see something like Austin Beer Garden’s win in 2016 as a good anecdote for the changing geography of success with styles, as well as a bit of evidence for the (subjective) claim of Austin as the “Pilsner Capital of America.” Austin Beer Garden also won gold this year in the American-Style Pilsener or International-Style Pilsener category, for what it’s worth.

But let’s talk about Firestone’s Pivo. Since its debut in 2013, it’s placed in four out of five years, including three gold medals and this year’s bronze. That’s a hell of an accomplishment that caused me to (foolishly) ask on Twitter as I considered what that meant, is it the best beer in America? Everyone @’d me.

The reason behind asking the question, aside for the fact I enjoy the discussion, is that kind of success isn’t really seen outside of something like the American-style light lager category, where macro brands dominated for years. So of course it’s a fun excuse to pose the question, if only due to its success in GABF and inclusion in my 2014 normalization analysis of that year’s “best beer” by writers from around the country, which showed Pivo to be one of the most beloved beers among those that cover the industry that year.

A second tier of reasoning behind asking the question is its connection to things inherently popular (but not rooted) in American beer drinking culture, where the pilsner or something close to it has long been the go-to choice for the vast majority of Americans. Plus, you know, hops, thanks to its “West Coast dry-hopping twist.” A light, sessionable beer with some distinctive hop flavor? Sounds pretty spot on to what a large collection of Americans might seek out, beer geek or not.

Before you take to social media to tell me what an idiot I am for asking a question about a “best” beer, please take a look at all the other writing I’ve done on why calling a beer “best” is foolish. I don’t think Pivo Pils is the best beer in America and never said as much there or here – beer is an experiential good that can’t be quantified in this fashion, no matter what RateBeer, Beer Advocate or Untappd users tell us. However, in terms of award success and its place within America’s flavor preferences, I simply think it’s a fun discussion to have regarding Pivo’s place among our beer zeitgeist. Nothing more than that.

Kudos to Carla Jean Lauter for this handy map:

% of each state's total breweries pouring at #GABF: pic.twitter.com/h0UXMWmJyV

As a post-GABF look, here’s a heatmap of winners (click to enlarge): 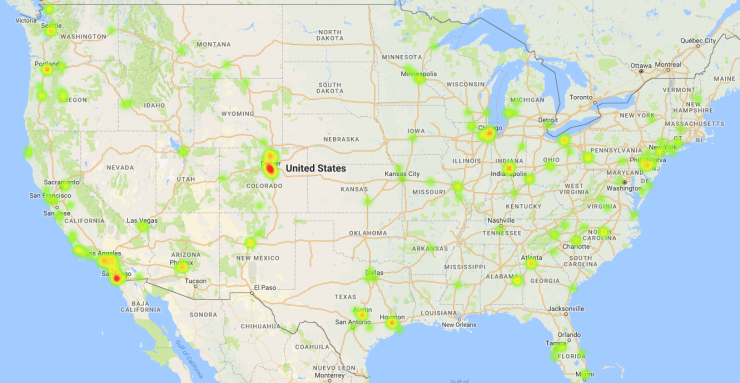 At the top, California (57) and Colorado (38) accounted for nearly a third of all medals awarded in this year’s festival. Here’s how the rest of the top-10 looked:

Of note, I shifted one medal – a gold for Appalachian Mountain Brewery – from New Hampshire to the brewery’s home state of North Carolina. AMB has brewing partnerships with Craft Brew Alliance/AB to produce some of their brands.

Part of the discrepancy between the states listed above and everyone else can be seen in the context of Carla’s map. It costs money to send beer to GABF, let alone a desire to do so, and there are many that choose to not take part for a variety of reasons. States like California and Colorado benefit from two clear advantages: California has more than 600 breweries and Colorado, with about 350, benefits from both number of potential entries aided by close proximity of bringing or sending beer to Denver.

For beer travelers, the above heat map certainly gives you an idea of where to travel, but if you’re in either California or Colorado, you’ve got 38 different cities with a GABF award-winning brewery in the Golden State and 18 from the Centennial State.

5 thoughts on “GABF by the Numbers: Coffee, ‘Session’ Beer and Winner Geography”