Quantifying aspects of beer is easy. We have definitive numbers that tell us about alcohol content, color, flavor and more.

But the question at the core of my last post, analyzing the value of “best” beer, asks about the potential of determining context for rarity. Given that the highest rated beers typically share common traits of style, ABV and availability, is there a way for us to better define what a lack of obtainable bottles or cans means to beer enthusiasts applying numbers to quality?

At worst, it’s a fool’s errand, trying to get into the minds of beer raters. At best, it’s an unscientific process that may scratch at the surface of a full effort, although we do have a good idea of what rarity means when it comes to product sales:

“Scarcity has this effect of making people perceive products as more valuable simply for the fact that they’re scarce,” business psychologist Nir Eyal told NPR in 2014, when, naturally, the network was covering the hype of Pliny the Elder, the sister beer of Pliny the Younger.

To build on the analysis of what we might have learned from Beer Advocate’s top 250 beers, I thought it’d be worthwhile to also peek at what we might learn from BeerGraphs.

Why BeerGraphs? Because the site pulls data from Untappd, I felt it offered two things:

You can read my breakdown of Beer Advocate’s top 250 beers in this post. Since BeerGraphs doesn’t have a designated “best of” list on the site, I pulled the top 25 beers from seven different ABV sections, providing 175 total beers in the collection. The list was selected from ratings based on standings on Nov. 12.

The biggest thing to mention here is the 22 different beer styles that add up to the 47 total beers in the “Other” category. Nine different styles had one beer listed and four brands were included for barleywine, gose, radler and strong ale.

Otherwise, things look pretty normal. Because this selection of beers is broken up by ABV, many inclusions from 10.1 percent and up include imperial stout. Even still, IPA hangs right in there. New Glarus is almost exclusively responsible for fruit beer being included.

The Value of ABV

For each ABV section, I averaged the “Beers Above Replacement” of all beers. Per BeerGraphs, BAR is a proprietary statistic used to measure of a beer’s quality by indexing a beer to its style. You can read all about it here. To put numbers into context, here’s how to consider values in sporting terms:

… and here are the results: 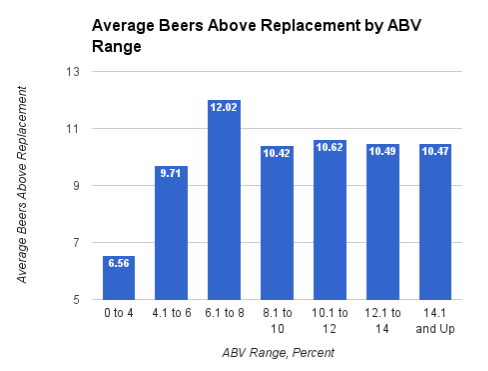 The beauty of using BeerGraphs for this data is the fact we can pull the top 25 of every range above. With this information, we can look at the 0 to 4 percent range and see that people simply don’t go crazy for low-ABV goses, radlers and fruited table beers.

No surprise: the highest-rated section, 6.1 to 8 percent, features 24 IPA/DIPAs out of 25 featuring expected names like Tree House, Trillium, Russian River and The Alchemist, among others. The lone holdout is Funky Buddha’s Last Snow Porter, made with “coconut, coffee and natural flavor” and is so popular it gets its own release party.

From there, I took the top-10 rated beers in every ABV section – the best of the best – and pulled the averaged Beers Above Replacement for each set. Now we have some differentiation: 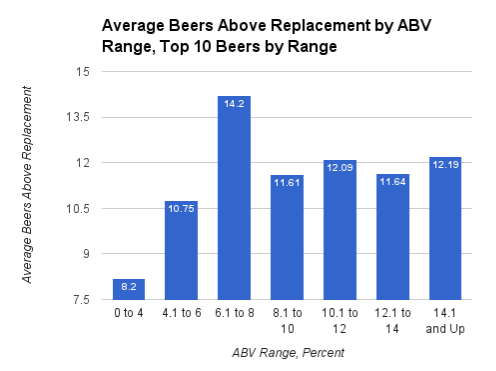 Fittingly, everything gets a boost, but that jump in the IPA-heavy 6.1 to 8 percent range clearly shows its dominance thanks to this top-10 lineup:

Along with being good beers, we could likely narrow that list down to just one or two (Nelson and Pliny) that could be had with some ease within a normal distribution footprint.

The Value of Style

Like with Beer Advocate, the stranglehold of imperial stout and IPA is emphasized when you compare style-to-style.

From the total 175, I used the averaged Beers Above Replacement for any style that had four or more beers, leaving me with 147 beers across eight styles. For the purposes of this example, I put IPA, DIPA and hopped-to-heaven pale ales in the same category, the same as I did with the Beer Advocate list.

This type of listing is somewhat expected when the IPA/DIPA/pale ale (63) and imperial stout (53) categories represent 79 percent of all the beers included in this data set.

I then “normalized” the list in the same fashion of Beer Advocate’s collection, taking the top-10 beers from both the IPA/DIPA/pale ale and imperial stout categories to even out the number of beers included in each grouping. The chart changes quite a bit afterward: 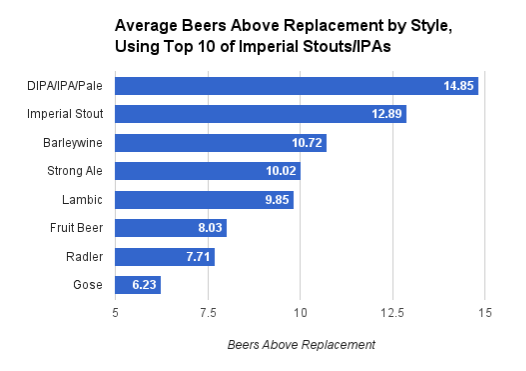 For reference, here are those top-10 best beers for the two edited categories, per Beers Above Replacement:

We saw many of the hop-forward beers in the previous list above, but I do find the collection of Bourbon County brands representing all imperial stouts interesting. This differs from Beer Advocate’s list, which includes breweries like Tree House (of course), Founders, Funky Buddha and more, which points toward the broader user base of Untappd and a further definition of “rare” in beer. These Goose Island beers are more readily available – but still hard to come by – and that shows up here.

Rare Gets a Number, Sort Of

Building off all of this, BeerGraphs’ collection presents a good pivot from Beer Advocate. Because we’re able to look at this data set in even lists of 25, it’s easy to compare the top and bottom of these selections.

The graph below shows the top-10 beers of each ABV range compared to numbers 11 to 20, with an assumption that lower-rated beers, based off Beers Above Replacement, will present lower scores and fewer rarities: 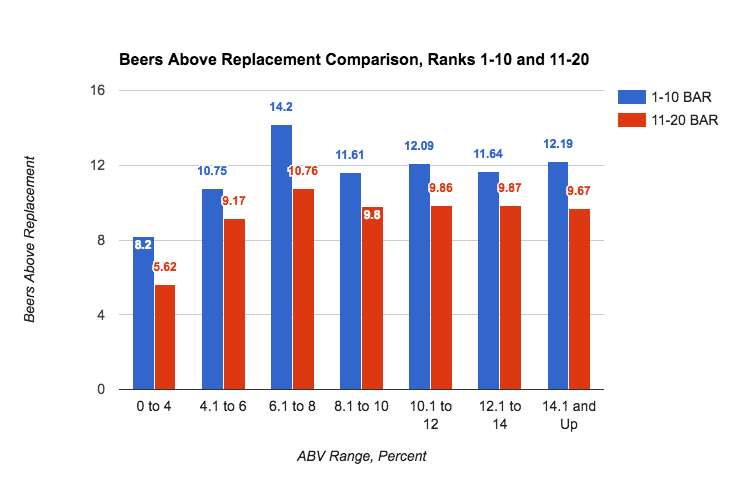 The split in scores is certainly noticeable, and in my subjective “rarity rank” as well. Looking over the 20 beers included in each set, I found that an average of 1.7 beers in the top 10 could be purchased in a normal fashion within a brewery’s footprint (Bell’s Hopslam or Surly Abrasive Ale, for example). That number rose to 3.7 for 11 to 20, which included beers from Southern Tier, Stone Brewing, Troegs, Ballast Point and more.

For sake of further emphasizing the point, I pulled the top overall 175 beers listed by Beers Above Replacement. This time the sections were still separated into 25 beers each, but based solely on ranking, not ABV. From that list, I averaged the BAR for each portion of 25 and again subjectively tallied the number of beers I felt a consumer could buy with a normal amount of hassle:

From a rating point of view, great beers to be found no matter where you look, but a change nonetheless.

What Does It Mean?

While certainly unscientific, these findings, paired with those from Beer Advocate’s list, hopefully lend more credence to the previous research hinting at the value of rare beer and how it can impact perception. As always, quality matters, and any beer included on these lists checks that box, but the extra boost garnered from being a small batch or one-off beer appears to help.

In recent weeks, while speaking with beer industry people for several stories I’m working on for publication, I have heard multiple times some variation of “we want to do more one-offs.” On one hand, that’s beneficial for a brewer, who gets the opportunity to play or expand their repertoire. On the other, these kinds of comments seem to suggest the knowledge of what those kinds of releases do in terms of impact for a brewery or beer.

If variety and new experiences are going to hold important places for consumers – not just in beer, mind you – then the idea of rarity may be as much of a business tool as circumstance of production.

8 thoughts on “Examining the Value of ‘Best’ Beer: BeerGraphs”