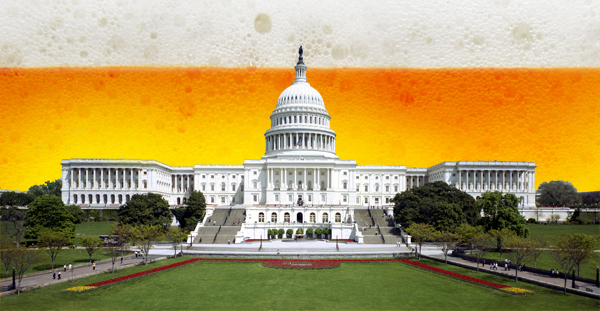 On Sept. 26, the Brewers Association announced that one of their major governmental priorities, the Craft Beverage Modernization and Tax Reform Act, had hit a milestone. More than half of the US Senate had signed on to cosponsor the bill, which aims to reduce federal taxes on beer production, among other provisions.

In recent days, the coverage of the now 51 out of 100 senators signing on has tried to signal that the new number of cosponsors meant good things for the bill.

But before we get ahead of ourselves, let’s take a quick look at where things actually stand.

The legislative process is nothing but a complicated one, and I don’t claim to have all the answers, but the reliance on vanity stats such as cosponsors seems a bit misleading. According to 2013 research by Salon.com, the previous three Congresses at the time weren’t reliant on the number of cosponsors to pass a bill: “An average of 78 percent of all non-commemorative bills enacted into law had 10 or fewer co-sponsors, and just over 21 percent had no co-sponsors at all.”

“This may come as a surprise to anyone who has ever organized, participated in or even simply followed with interest the process of rounding up co-sponsors,” wrote Anthony Clark, a former House staffer. “Even more surprising is the fact that the more co-sponsors a bill has, the less likely it is to be enacted. And it takes almost twice as long to enact bills with 100 or more co-sponsors than bills with none.”

“…our analysis of network structure suggests that legislators in each state are organized into relatively small groups, exhibiting a “clique-like” quality, whereby members coalesce around several common traits and cosponsor each other’s measures,” they wrote.

In essence, cosponsorships shouldn’t solely be taken on an individual basis, as relationships are pivotal to understanding these kinds of political activities. If you’ve ever watched an episode of House of Cards, you know how much Frank Underwood loves to work these kinds of very dramatized maneuvers. Cosponsorships could happen because of friendships or political relationships as much as because a politician believes in the piece of legislation.

For example, in the Senate version of the Craft Beverage Modernization and Tax Reform Act, 10 states have individual cosponsors, while 20 states have both their senators cosponsoring. Seven of those 20 have bipartisan representation, perhaps indicating the appropriateness of both a democrat and republican supporting the bill in order to show both parties support tax reform for a thriving industry. Two of those states, Colorado and New Hampshire, had senators cosponsor on the same day or within a day of each other.

Either version of the bill has not gone far. In the House, the last action taken was in July 2015, when it was introduced. In the Senate, it was read twice and referred to the Committee on Finance in June 2015 and nothing has happened since. If you’re looking for the potential of discussion to happen in that committee, know that 15 of the 26 Senators on finance committee are cosponsors.

But that still doesn’t tell the full story. This week, Kendall Jones pointed out on the Washington Beer Blog that some craft brewers may not even support the measure:

As he put it, “$3,500 is what it costs me every time the dishwasher in the taproom breaks down, but with $110,000 they can buy more tanks, hire more sales people, upgrade their packaging system.”

This undoubtedly isn’t the case for every brewery owner, and I’m sure plenty would welcome a tax break, but before we start singing the praises of our representatives for moving along this piece of beer-related legislation, let’s not get too far ahead of ourselves.

2 thoughts on “What’s a Cosponsor Worth? A Counterpoint on Beer Tax Reform”