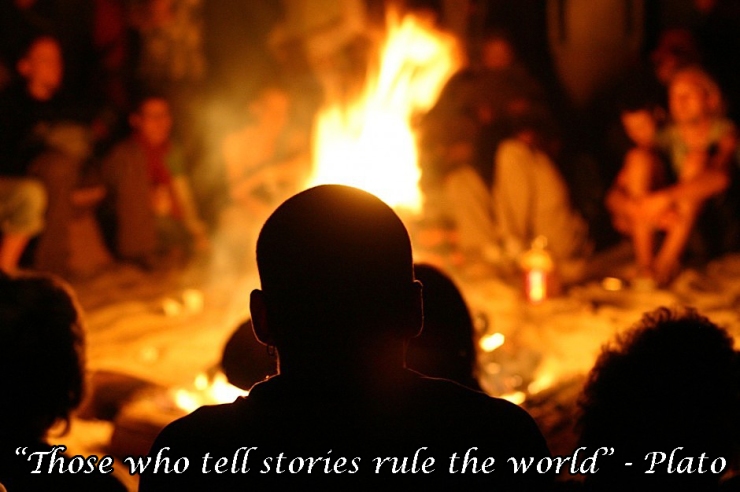 We love drama. We love emotion. We love stories.

Hardwired into our sociology, humans are drawn to the narrative arcs we create to highlight the challenges and successes – real or make believe. Storytelling is part of who we are:

…human beings are natural storytellers—that they can’t help telling stories, and that they turn things that aren’t really stories into stories because they like narratives so much. Everything—faith, science, love—needs a story for people to find it plausible. No story, no sale.

But how those stories are constructed is just as important as why they’re being told.

As the beer industry has matured in recent years and businesses work to separate themselves from each other, crafting a story and message that runs through an overall brand has become almost as important as crafting a good beer. People want something to connect to beyond their pint glass.

Through this same effort, however, those in the beer community have created broader stories that extend past individual businesses into the ethos of what beer – or, often, “craft beer” – is supposed to be about. Mostly, it creates a perpetual “us vs. them” scenario discussed among beer lovers who shower praise on The Small Guys, hate on The Big Boys and show anger or indifference to those caught in between.

Certainly, there are many facets to the political and business side of the industry that rightfully rile people up. But when we home in on these topics and put our blinders on, there are stories we have so easily accepted we fail to see the partial fallacy of a “black and white” scenario.

There is plenty of gray to go around.

Much like the perceived “death” of flagship beers, the vacuum created by the most vocal minority of beer lovers may ignore an important reality that paints many or most drinkers into the same corner. While you or I may have an interest in the business practices or background of beer companies, the vast majority of people do not.

Consider this conversation from the recent Brewbound Session in Brooklyn, where leaders of several major breweries discussed the perception of shady ownership practices:

Robin Ottaway, president, Brooklyn Brewery
I don’t think consumers care about private equity. Look at coffee. A lot of your darling coffee companies are owned by private equity. Nobody cares.

Christine Perich, CEO, New Belgium
How could beer drinkers possibly care? There is so much confusion on the shelf. I’m guessing there are lots of things we all buy that we have absolutely no idea who we’re buying from because who has time to do their homework? I don’t.

Robin Ottaway
What is ‘craft’ as lines are getting blurred? Consumers don’t care.

Robin Ottaway
Should they? Is that a crime? Should we demonize them because they don’t know that?

Alan Newman
No. The fact they’re drinking better tasting beer helps us all, so I’ve always been a fan of those.

Include a Craft Beer Evangelist into that mix and you’d have them frothing at the mouth, accusing these industry insiders as heretics for breaking away from the narrative so commonly tossed around by that 1 percent Alan Newman mentions. Anything less that Brewers Association-defined craft or indie or whatever kind of beer you want to call it is Evil. Right?

Whether it’s simply public sentiment, these people surely don’t sound like they hate competitors with the vitriol some consumers might. In fact, if you watch the discussion, they’re more concerned with wine and spirits than beer.

Even still, the common thread running through these comments is an odd one from the perspective of beer enthusiasts. The conversation seems to be based around respect for companies big or small, summed up so wonderfully by Andy Thomas:

In a way, it’s playing politics. In rather candid comments, these business leaders hint that the reality of the industry is that ‘craft’ doesn’t really matter as much as presenting options for something tasty to be shared during memorable moments. However, in day-to-day operations, the business and marketing plans of many breweries is entirely based on exploring just how different, hip and ‘craft’ each can be.

it's always effective during the revolution – becomes harder to defend when you become the new establishment.

The sentiment was displayed most blatantly in recent weeks by two of the most outspoken leaders in the beer business community: Lagunita’s Tony Magee and Stone Brewing’s Greg Koch.

In a wide-reaching interview with Jason Notte for Marketwatch, Koch showed some strong interest in “having it both ways” after spending much of the past six months railing on multinational beer corporations while Stone became one. In addition to its California brewery and Richmond facility, Stone has also started producing beer in Germany, owns a distribution company in California and will add a new taproom in Napa. Koch set up an investment fund to act as a source of equity to “true craft” businesses and has spun off Arrogant Bastard into a sort of subsidiary to Stone.

“At Stone, we’ve never thrown elbows,” Koch told Notte. “That’s not our style. It’s that ethics thing and it’s earning a place on merit. If you throw elbows and throw weight around, that ends up with a very temporary result, and we aren’t interested in temporary results.”

One of Stone/Arrogant Bastard’s newest offerings, of course, is “Who You Calling Wussie?” a pilsner released at a time when many breweries are debuting their own craft lagers to sell alongside the mass produced brands Americans have downed for decades. But Stone’s version is different, of course: “Wussie is a pull-no-punches, intense, hoppy, true-to-form beer,” Koch explained.

What about Tony Magee? After announcing in 2014 he wanted to have five Lagunitas production facilities across the country and later selling a 50 percent stake in his company to Heineken, growth is continuing rapidly for one of the country’s best-selling craft brands. Last week, Lagunitas made public plans to buy stakes in three other breweries (including rebranding a South Carolina brewpub as a Lagunitas restaurant) and open up two “community rooms” in San Diego and Portland, Oregon.

In 2012, Magee went to Twitter to share displeasure with AB InBev and MillerCoors. In 2014, Magee told NPR no matter how big a craft brewery may get, it will always be fundamentally different than global ones, whether due to ingredients or culture.

What of Goose Island, 10 Barrel and other breweries following a similar growth pattern to Lagunitas with new brewpubs and outposts?

“After a while, that turns into Applebee’s or something,” he told the Chicago Tribune. “I’m not sure if it really promotes your brand, plus it competes with your local retailers who are otherwise happy to sell your beer.”

But in the case of Lagunitas, Magee says the company’s authenticity, making it decidedly un-Applebee’s, is built around its commitment to local communities and the fact that Lagunitas isn’t into acquisitions or consolidation. Lagunitas is about “partnerships” and “expansion.” All the same, I’d love to know what people in Charleston, South Carolina think about a local brewery getting rebranded as a Lagunitas brewpub.

In all these cases, the important caveat is that there’s nothing wrong with what they’re doing. Each brewery is growing, exists within a capitalist market and a competitive business, They should be doing things like this.

But it’s when we get to telling stories about it all, we lose our way. Creating beer is certainly different than marketing beer, and it’s the marketing that can more easily be refined to tell the story you want instead of the malt or hop bill of your latest release. Myths abound in beer.

The Founding Fathers of craft beer – people like Fritz Maytag, Ken Grossman, Jim Koch or Jeff Lebesch – were boot strapping innovators full of self-determination that went from rags to riches … were actually in a better position to succeed than most other people when they entered the beer industry.

One of the hardest actions to sometime take when we are engrossed (and even indebted?) to something is to step aside and look at the full story. It requires extra time and effort, but can also provide us with educational context from which we can better comprehend what it is we love so much.

Most important, it demystifies the stories we are told. Not taking anything away from the truth, but offering deeper context from which we can build, telling new stories of our own.

5 thoughts on “The Myths We Tell”