Death, taxes and Pliny the Elder being voted as Zymurgy’s “best beer” in America. All the things you can count on for the past eight years.

What makes the annual poll unique, however, is that it’s voted on by members of the American Homebrewers Association, not the public at-large from around the world, like Beer Advocate or RateBeer. On that point of information alone, you can surmise why Zymurgy’s list always includes unforgettable heritage brands made by the likes of Sierra Nevada and Dogfish Head. In just about any other scenario, beers made by these breweries are long past their expiration date of relevance to the Beer Nerds controlling review boards. Not so much on this year’s list – again.

BUT … the results are still similar in at least one way: these voters love their IPAs. More than 18,000 online votes cast with up to 20 allowed per voter picked the favorite commercial beers available for purchase in the United States.

IPA rules the day, but if I had my way, I’d throw in a couple of pale ales (Three Floyds Zombie Dust and Toppling Goliath pseudoSue) into that camp, as they simply meet changing style expectations to hop the living crap out of lower ABV beers.

“Some pale ales are just as hoppy as IPAs,” 3 Floyds head brewer Chris Boggess recently told Craft Beer and Brewing. “A beer like Zombie Dust would have been one of the hoppier IPAs on the market back in the mid-1990s when I started brewing.”

We’ve long known about the way INSATIABLE ANIMALS are impacting IPAs, so the trend of more IPAs, DIPAs and IPA-like pale ales should come as no surprise:

This year’s list was aided by the addition of four new IPAs:

Typically, I’d love to highlight this section, but it’s really more of a “nothing to see here” kind of thing, as the growth and plateau have been wildly consistent in recent years: 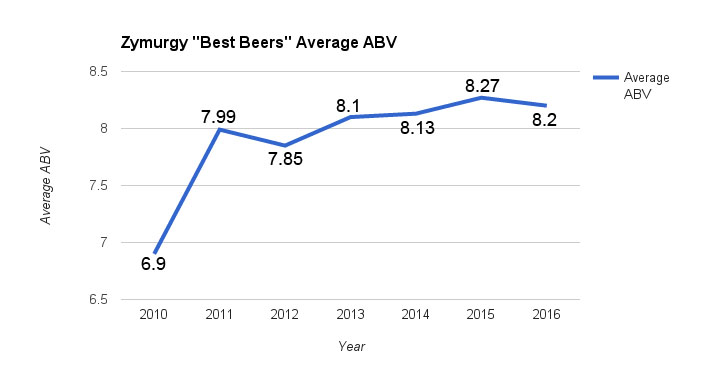 The jump from 2010 is because of the structure of voting. In 2010, Zymurgy allowed voting for beer that “has to be commercially available somewhere in the United States,” allowing inclusion for Duvel, Saison Dupont, Orval and others. Beginning in 2011, language was changed to just “commercially available American beers.”

But, as I pointed out last year, hovering around 8 percent ABV still emphasizes beer drinkers’ love for boozy brews, as the average sits more than a standard deviation above the average craft beer ABV of 5.9 percent. In 2016’s list, 11 beers had at least a double-digit ABV and 45 of the 50 had an alcohol content above the 5.9 percent average.

If we play with the setup just slightly, it may be worth noting the difference in ABV if the list is split in half:

I’m not sure how much this matters, but I’d say that if the bottom of these kinds of lists are more susceptible to change – new beers coming in, others going out rapidly – that a higher ABV among the bottom half overall represents an appreciation or want for beers packing an extra punch. Because Zymurgy’s list isn’t just chock full of ultra-rare imperial stouts and double IPAs, I’d arguably put a little more weight on the disparity on these lists, as that bottom-25 alcohol content has creeped up in the last few years. It represents more commonly available beers, but reflect drinkers’ interest in beers that carry more ABV and the availability of such in stores.

So what beers are voters showing more love for this year? Here are the biggest risers in the list of 50 with the number of spots they jumped:

Grapefruit Sculpin, which first appeared on this list last year, now sits one spot behind regular, old, boring Sculpin (#4). It’s also the only fruited IPA on this list, but that may change next year with such a huge influx in 2016. It’s also worth pointing out Head Hunter, which was also a new beer on the 2015 list, and its universal acclaim on Beer Advocate (96) and RateBeer (100). Wouldn’t be surprised to see that one jump again.

Shoutout to All Day IPA, the sorta-OG Session IPA that’s still getting it done while everyone else has been jumping on that style bandwagon.

And on the opposite side, those that have fallen the most:

I’m rather surprised with the tumble of Russian River’s wild ales, but considering the proliferation of that style these days -not to mention all the kettle soured beers that are flooding shelves – it won’t be hard for people to find other versions of the style to adore. Otherwise, we see a normal slump from beers on this list. Zymurgy readers hold on to heritage brands for a long time, but they do fall, like Torpedo and Blind Pig.

To put some of this into context, it’s worth looking back at other heritage brands and how they’ve moved over the years.

Ditto for Sierra Nevada, although that Pale Ale won’t die, which I assume is because voters recognize it for the influence it undoubtedly had on them and others:

But also, so long, Stone:

Ruination, of course, is now Ruination 2.0, but the fall of these beers seems to speak to the overall change in business plan for the brewery, which is churning out new beers like crazy. Worth noting for posterity’s sake: Enjoy By went from #4 last year to tied for #10 on 2016’s Zymurgy list. When everyone else is touting their uber-fresh IPA, maybe it’s harder to keep drinkers’ attention.

It may be me, but I’d venture the guess that Bourbon County Stout and Kentucky Brand Stout both benefited from larger production runs. Please tell me if I’m wrong, but I believe Goose Island has increased the number of bottles available, if only through a packaging change of four-packs to individual bottles. Anecdotally, I saw more action around KBS than before, but I’m not sure if that’s because Founders’ additional cash flow helped them to up production.

The others seemed to be making rather quick jumps in a short period of time (for a Zymurgy list) and were worthy of including. Feel free to draw your own conclusions and leave theories in the comments. IPAs are big, so Jai Alai (always a crowd pleaser) and All Day make sense. Backwoods Bastard? I love that beer, so maybe the demographics of Zymurgy voters just skews a bit heavy toward maltier brews, too.

Glad to see Tank 7 continue to get its due.

Yikes, that’s a lot of rankings.

As noted several times above, one of the most curious parts of Zymurgy’s rankings is based off the voter’s willingness to keep “classic” brands around for such a long period of time. We know beers like Sierra Nevada Pale Ale or Deschutes Black Butte Porter are iconic options we can always rely on, but ever so slowly, new standard bearers are taking over top spots. Lawson’s Sip of Sunshine debuting at 14 seems like a big deal and appearances like Fat Head’s Head Hunter showcase a strong acceptance (and love) of the new wave of juicy/fruity/savory IPAs.

But, as I’ve pointed out before, that top spot of Pliny sorta gets at me. Due to Pliny the Elder’s very limited distribution (CA, CO, OR and Philadelphia) the number of people who have access to this beer is very limited. It may be a popular choice on beer trading forums, but I can’t help but wonder how much its reputation, historical place with beer drinkers and overall hype keeps it at No. 1, especially when hundreds of thousands of words have been written about how it’s really not as good as you think.

Note: For purposes of style classifications, I included Lawson’s Finest Liquids Sip of Sunshine as a DIPA in this set. At 8% ABV, it exceeds the maximum suggested level of IPA, per BJCP. Also, my own personal bias says calling it an IPA at that level is silly.