My favorite line from MillerCoors research is discovering there are “more than a handful” of women who drink beer. pic.twitter.com/8an7hKu16C

Earlier this week, Dan Fox shared a post on his “Hey Beer Dan” blog posing the statement that sexism in Big Beer ads are a “21st Century myth.” The position, perhaps a bit short-sighted, depending on your point of view, was spurred because of MillerCoors interest in changing their advertising strategy to be more purposefully inclusive of women.

A long time coming, but a welcome change to our modern society, at least.

Specifically, Dan suggests that Big Beer has avoided being sexist in the last 15 years, an intimation that feels a bit hollow. Just because, as Dan points out, distributors “abandoned wet t-shirt event sponsorships and the like long ago without need of MillerCoors’ hectoring,” doesn’t mean that Big Beer – or beer, period – has moved past decades of cliches and stereotypes of women. It’s worth pointing out that Dan mentions continued problems within American craft beer, which has seen its fair share of foolishness toward women.

But to believe that companies like Anheuser-Busch, MillerCoors or others are outright innocent and their “ads are not in any way sexist” simply does not compute.

To begin with, sexism doesn’t have to equate to women wrestling in ponds or cheerleaders at a football game. It can be subtle imagery or context. For example, Twitter follower Maddie pointed out this Super Bowl ad by Budweiser:

Sure, there’s no Swedish bikini team, but it certainly appears to lack any women drinking Budweiser. In fact, the role of women in that commercial appears to be solely to act as servers of the beer – to men, of course. This is a historically consistent portrayal of women in beer advertising, going back decades.

And their “Man Law” ads:

While purposefully advertising to men and ignoring women, especially playing on societal tropes of manliness and how “men should be men,” these ads leave something to be desired.

More blatant is Heineken, which released what one commentator felt was the “most sexist beer commercial ever produced” because, in their view, it portrays a woman’s uterus as a beer keg:

“That isn’t futuristic,” Bob Garfield wrote. “It’s retrograde. And when women see what Heineken is up to, it won’t be a robot that needs to be repaired.”

Or how about MillerCoors Smith & Forge Cider, whose commercial strategy is based around selling a product to men which is actually sold equally between men and women? Or when Molson provided business card cutouts in magazines for men to showcase their wealth by owning yachts and exotic animals because “Ladies freak for guys with expensive hobbies.”

Then there are cases of more blatant sexism, like the hot water Labatt USA got into for these billboards for a subsidiary brand, Tecate: 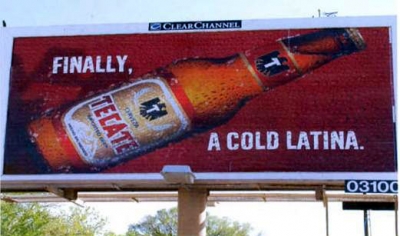 If that Heineken robot ad didn’t do it for you, what about this misstep with their Most Interesting Man in the World campaign, which likened women to wild animals? 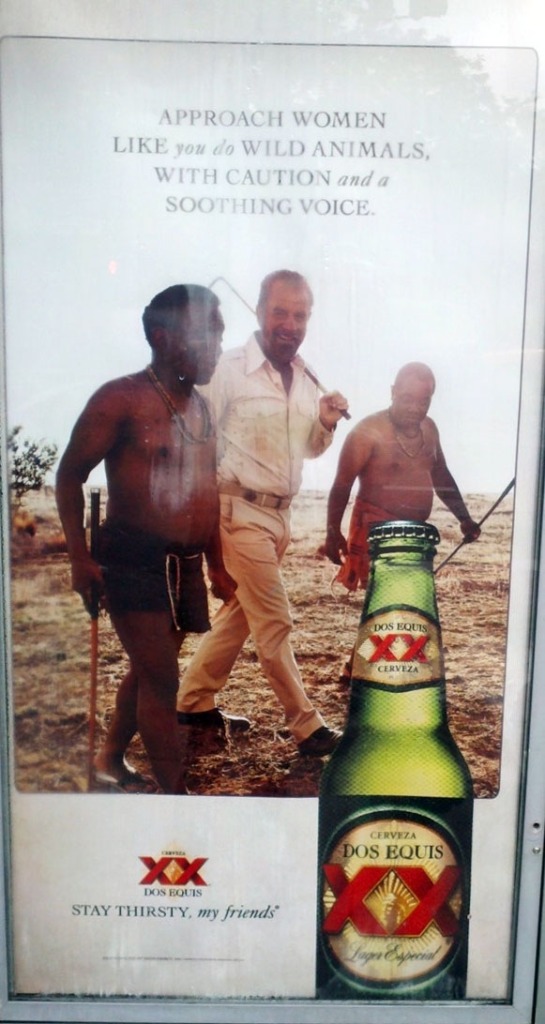 At the core of all of this is the reason companies do this, not just in beer, but across industries. When you deal with a crowded marketplace, you need to get attention. If your market is traditionally skewed male, then it makes your decision even easier.

“The research has said that sexual appeals, anything with sexual innuendo, whether it’s blatant or subtle, do get attention,” Michelle Nelson, an advertising professor at the University of Illinois at Urbana-Champaign who has researched gender targeting in ads, told Al Jazeera America. “Unfortunately it’s not always so positive for the companies that made them. If they had just run it by one focus group, I suspect someone would have said, ‘Hey, this is wrong.’”

Dan may believe that sexism has gone away from Big Beer since 2000, but it’s pretty clear that’s not the case. Again, it hasn’t gone away in craft beer, either.

But we still need to address the elephant in the room. I am a middle class white male. I know he is also a white male. We certainly have the ability to comment on these issues, but to believe that we have total and complete understanding of how it makes women feel is willful ignorance at worst and poor judgment at best.

But most of all, a simple use of Google can show us that being a Big Boy in beer still means you can be complicit in perpetuating age-old stereotypes.

Editor’s note: As I’ve pointed out on Twitter, here and elsewhere, advertising is shifting rapidly within the beer industry. While all the examples shared in this post are from the last right to 10 years, it’s worth noting that companies are doing things very much different at this moment, focusing more on history, personality and placement in people’s lives. This does not mean sexism is gone or isn’t appearing, but maybe it even emphasizes the point of this post even more, that we must step away from marginalizing an entire demographic and find something that works better.

Update #1: In addition to commenting below, I’ll also add thoughts I receive via Twitter at @bryandroth. Thanks to the crew at Stouts & Stilettos for pointing this one out:

Update #2: Tamre Mullins shares this ad, noting that “the reasons it bothered me: the 1st woman didn’t ‘get it'” and the second woman was naked, in a shower, being gawked at by men:

@tamremullins @BryanDRoth @StoutsStilettos @madwags Sexism is everywhere. Pisses me off @ races & car shows. Girlz can be in the driver seat