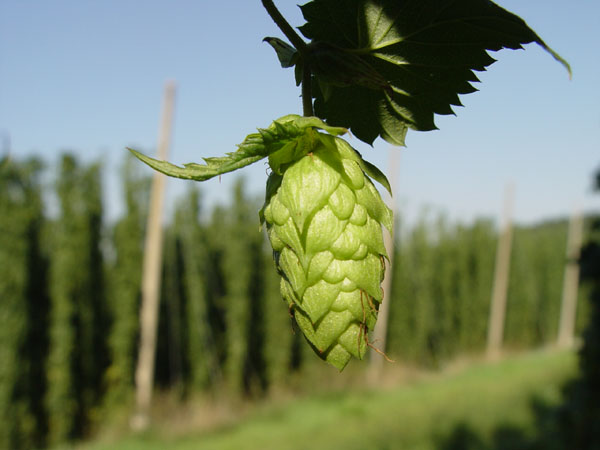 There’s a running joke on one of my favorite podcasts, Steal This Beer, where co-host and Carton Brewing owner Augie Carton refers to Mosaic hops as the “sluttiest” hop out there.

Of all the varieties available to brewers – and there are a lot – Mosaic doesn’t just play nicely with other hops, it also offers its own flavorful characteristics that range from tropical fruit to blueberry and even pine. Whether in a pale ale or IPA, consumers are lapping up Mosaic-focused brews across the country. As one of the hottest “aroma” hops available on the market, its popularity continues to grow as more drinkers seek out beers that move beyond bitterness.

So it comes as no surprise that Mosaic is having a moment in the spotlight. If you didn’t notice it in your beer or on a label in 2015, know that there’s an even better chance you won’t miss it in 2016.

Mosaic might have been 2015’s Hop of the Year – it definitely has my vote – but looking back on last year’s harvest, we’ve got a great idea of which hops are making a splash right now and perhaps how your favorite beers will taste in the future.

The Hop Growers of America recently released their annual report highlighting last year’s harvest, which gives us some additional insight from an analysis pulled together at mid-year. At that time, I focused on Centennial, Citra, Simcoe, Mosaic and El Dorado, what I perceived to be the five biggest movers in terms of new acres planted.

Now with final tallies for 2015, here are the acres harvested of those hops as well as Cascade, just because I want to highlight what a big deal that “classic” varietal is:

Overall, there were 44,882 total acres of harvested hops reported to Hop Growers of America in 2015 and these six varieties accounted for almost half – 19,738.

To emphasize our growing love for these types of hops – you can learn more in my All About Beer story – let’s also take into account the shift in aroma hops (those with oils ideal for smell and taste) versus alpha hops (typically used for bittering qualities, along with taste).

First, based on Hop Growers of America’s estimates of varieties grown in the Pacific Northwest, the increase of acres for aroma varieties over the last five years, with the overall percentage change during that time:

And the alpha hops:

With all this in mind, the question begs to be asked: what does this mean for your beer?

To get a better sense of how to answer that question, I pulled a listing of IPAs, DIPAs and pale ales pretending not to be IPAs from two 2015 “best beer” lists: my own compilation using a objective, quantitative approach and one created by RateBeer. From this collection, I ended up with 58 beers. I then culled the herd by looking up the specific hops used in each of those. If the hops weren’t listed online, a beer was taken off the list. That left 42 “best” pale ales, IPAs and DIPAs from 2015 that included beers like Sierra Nevada Hop Hunter, Firestone Walker Easy Jack, Avery Raja, Sam Adams Rebel Rouser and Stone Delicious IPA.

I then tallied when a beer featured any of the previously mentioned six hops:

For fun, I also wanted to track Amarillo and Galaxy hops, two varieties I anecdotally found to be important last year, but not contained in the Hop Growers of America harvest figures. The breakdown using all eight hops:

Mosaic isn’t just represented in the most beers with 19, but from what I could find, five beers were single hop with only Mosaic. Many of these hops found themselves as the “showcase” hop in beers and didn’t have a lot of crossover being used in the same beer, but Mosaic does appear twice with Citra and Cascade and the one time El Dorado appeared in Oskar Blues’ Pinner.

This makes sense – these are all “sexy” hops – and each has flavorful qualities drinkers are after. As any brewer can attest, some hops play nicer with others and may even replicate some flavors, so you don’t have to simply layer on for the sake of it.

To further this point, the average number of hops used across these 42 beers was three – no need for more than necessary. The highest hopped beers in quantity were Boulevard’s The Calling (eight), Sam Adam’s Rebel Rouser (seven) and Oskar Blues Pinner (six to eight, depending on batch). An interesting trio, as one reason they may be higher is their access to raw ingredients. These are large businesses, after all, with more financial flexibility than breweries like Half Acre, Trillium, Portland Brewing and Tired Hands, who used one or two hops only.

To reinforce a point I made in my analysis of RateBeer’s best new beers of 2015, here are the breweries most represented on this list of “best beers” using the most desirable hops:

Plan your next beercation accordingly. If your favorite brewery can afford it from now on, that is…

The Price of Trendiness

Per the Hop Growers of America, the average price per pound of hops by main growing state and the U.S.:

From what I gather, and smarter writers like Stan Hieronymus can most likely explain, some ideas as to why we see price changes from 2014 to 2015, aside from general impacts of weather/yields/etc.:

Regarding prices and availability, Ann George, executive director of Hop Growers of America, mentioned this in the organization’s press release (emphasis mine):

It was promising to see the Brewers Association report that so many of their members are contracting, coming in at around 95%. While that definitely leaves uncertainty for those who are not contracting, the more contracts growers and merchants have, the better they can serve the domestic and global brewing industries. For those relying entirely on the spot market, that’s a pretty big gamble, especially considering the current market.

What’s your favirite hop outside Citra, Mosaic and Galaxy? #beerchat

Why does this matter? I think the specificity of this question is telling. Yes, I’d expect beer lovers who are enthusiastic enough about the industry to join a Twitter chat would know certain hop varieties, but to call out these three in particular says a lot about expectation of what these hops have been up to lately and what drinkers want in the future.