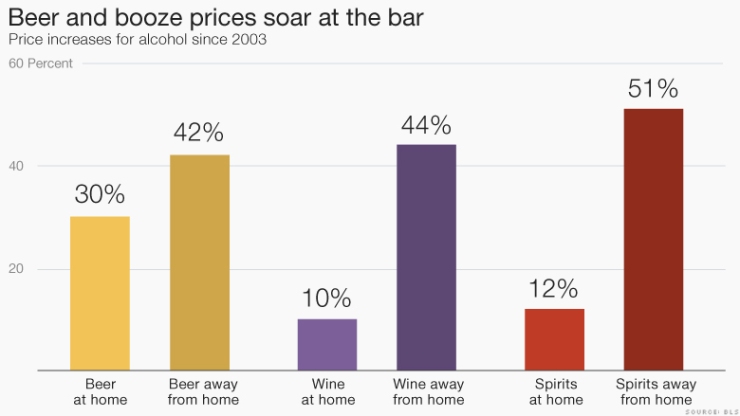 Nothing is good as it used to be.

People come and go. Things change. Time lurches on. Our memories are cherished, some more so with the lasting glow of nostalgia.

CNN recently reported numbers from the Bureau of Labor Statistics, highlighting rising cost of alcohol since 2003. Across the board, beer, wine and spirit prices have gone up, but the increases with beer in particular might not be so bad.

From way back in 2003, the $5 standard we enjoyed for a pint out has risen for many to $7, a natural jump in price roughly in line with inflation. Nothing is good as it used to be, except when it is.

For now, at least.

The cost of beer can add up fast these days, whether you’re filling up your mixed six-pack at your local store or splurging for that $60 bottle of Rare Bourbon County Brand Stout. Bars and restaurants are no exception, especially as attitudes change with what consumers expect from experiences when going out to eat and drink.

However, as costs go up, what we are willing to pay for our beer adjusts accordingly.

It’s all based around inelastic pricing, which sees the behavior of consumers match the shifting price point of a good. As costs go up for beer, drinkers are happy to spend more to match, whether it’s macro mass lager or a high-end craft beer hopped to the heavens and barrel aged with unicorn tears.

As Michael Kiser pointed out in a look at price flexibility in the industry, people want two opposing ideals: “the best things in the world, and they want them for cheap.”

True enough, people are always seeking out deals, especially younger drinkers who may be more frugal in their decisions. But the forces at play that influence the choice of how much to spend and when are also varied.

A willingness to accept the rising cost of beer is unique because we often perceive it only as a phenomena impacting those seeking out craft or imported beer. But as shown in a 2014 study published in the Journal of Agricultural and Resource Economics, it goes across the board.

BMC beers, seen as more economical choices, will still attract customers due to brand loyalty. Prices may have increased in recent years, but it’s been closely tied to inflation.

The change only shifts slightly with craft and imported beers, for which people are willing to spend more to stay within that category. A willingness to pay more reaches across each type of beer – macro, craft and import. But interestingly, consumers generally remain within their independent choice – they stick to BMC, craft or imports.

As we’ve seen more acutely within craft, prices have further to go. Economies of scale and ingredient costs help keep prices down for BMC beers, but the artisanal aspect of many small brewers – both in what they use to make a beer and how they produce it – creates greater price variation. A change, mind you, people are happy to pay for. Those are the “snob” consumers, “for whom the acquisition of scarce goods generate ‘signaling effects’ on consumption, increasing their utility when the good consumed is uncommon and generates status.”

If status is important, which can be found across goods from cars to food, then price increases have the potential to cause little harm. People are ready and willing to open their wallets. Kiser notes: “As the market gets more crowded, and shelf and tap spaces gets more limited, brewers will need to sell less beer at a higher margin, in order to maintain viability.”

To an extent, of course.

Of all the variables that impact the price of beer and what people are willing to pay for it, one aspect is also important to consider: geography.

What people are willing to pay in Chicago (or elsewhere) is different than the experience in a place like Portland, Oregon, as mentioned by Jeff Alworth:

Here breweries must compete on both price and quality. Our supply is insane. Breweries that overcharge or make mediocre products don’t sell a lot of beer.

Which makes sense. Oregon is awash in quality beer, a sign of high-level competition and a thirsty public willing to snap it up. But even with demand so high, prices still remain highly competitive, something Alworth and friend Patrick Emerson mention often on their Beervana podcast.

In October of this year, Alworth added to that thought:

Josh Pfriem recently released his first batch of barrel-aged beers, and he sold cork-and-cage bottles (12 ounce), for under $10. The quality was spectacular. He priced the beer to earn a profit. And in this market, he needed to: as good as his Flanders-style beers are, he couldn’t have charged much more for them.

A Willingness to Pay

Even still, there’s something of a limit on both sides of this discussion, where consumers are happy to pay more, but also want cost-efficient options.

Naturally, taste has a strong impact on cost comfort level and a study by researchers at Washington State University showed that taste was the most important attribute, followed by price and brand. To an extent, of course.

As research panelists were provided with four different beers and asked to rate their willingness to pay increasing amounts, there’s a steep curve as price goes up:

There may be a cost threshold for what people are willing to pay, but that limit is continuously pushed by two factors:

“As consumers find beers that fit their ideal tastes, they will be willing to pay a premium for them,” researchers wrote.

At some point, you’d expect all this to reach a head, with people accepting of only so many dents to their bank accounts before changing behaviors. But between observations both anecdotal and empirical, that doesn’t seem to be the case.

Humans are irrational, capable of leading with our heart as much as our brain. Even more, financial decisions can be heavily influenced by past decisions – old habits die hard whether actually good or bad in the long run. When discussing the potential for beer prices and what’s to come, we need to keep in mind the established marketplace and what behaviors are already the norm.

Our choices as consumers aren’t just impacted by the qualities of a product, but the company we keep. Our own social settings, behaviors and perceptions influence choices and expectations, so if we are ingrained in the beer community, where comfort around rising prices is more common, there may be less sensitivity to spending more. At the moment, it seems prices are destined to rise, but where this all leaves us is up for further debate.

Do higher prices mean higher quality? Will the continued flood of breweries and brands level the pricing playing field? When quality meets cost, what are we willing to accept?

Nothing is good as it used to be. Except when it may get better, in one way or another.

Related reading: Of Pints and Prices