A few weeks ago, I found myself sitting at the front of a room surrounded by fellow beer bloggers and writers listening to Julia Herz of the Brewers Association. It was the first day of the Beer Bloggers and Writers Conference, this year held in Asheville, North Carolina.

As Herz spoke to our group of 150 attendees – from the titular writers to brewery representatives, marketers and more – I looked around the room and jotted down in my notebook my first two thoughts of the conference:

At the time, Herz was speaking about women’s place in beer and its growth in recent years. An important topic to discuss, for sure. As I continued looking, I saw plenty of female faces, but they were all white. Ditto for the guys.

Which led to my third note:

Of the 150 registered participants at the conference, 61 were female. In that room, that would actually be accurate to the third of women who make up craft beer consumers.

But there was one person of color – Liz Garibay.

“No matter whether I’m going to a gathering for history or beer or writing, it’s usually not very diverse,” she told me. “Most crowds for these things aren’t, unless they’re very specific to target an ethnicity or gender. That’s the way it’s always been.”

To be fair, as a representative microcosm of the beer-loving public, I shouldn’t have been surprised. White drinkers dominate festivals and events I’ve attended for years, perhaps for reasons outlined in this previous post. But I still felt the need to pause and consider how and why this was something that mattered to me.

After all, white reporters dominate the media industry both in newspapers and television, so why shouldn’t that be the case with beer writers, too?

I sat on the thought for a few days, trying to think of how this breakdown must be taking place at events and in taprooms across the country. Mostly, it made me think about what it might be like for people who aren’t like me – white and middle-class. The stereotypical craft beer drinker.

But this is not about the idea of white guilt or anything of that sort. I’m a reporter and a writer. My literal job is to ask “why?”

And from people all over – first Liz and Allen Heurta, then Os Cruz and plenty of other off-line conversations – I started to find answers and perspective both historical and cultural. I was also left with plenty of questions which continue to pry at others, too. How does a cultural divide of our country fit within our niche community? Why do people care about this? Should they care about this?

The answer to that last question – at least from my perspective – was a resounding “yes.” If Liz or Allen *think about* this kind of stuff, then it was worth my time to investigate.

So here we are, three days and three posts later, hopefully better for having a conversation with each other. It’s a testament to the power of curiosity.

All it took was a look around a room and a question. 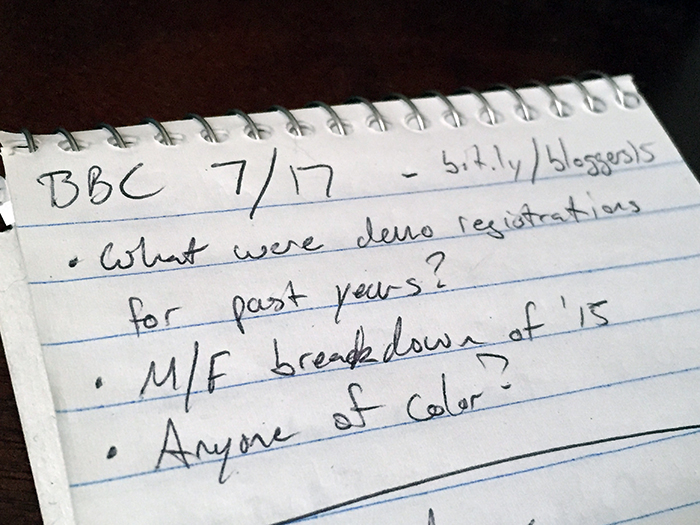 4 thoughts on “Reporter’s Notebook: Why I Wanted to Talk About Race”