Lately, it seems we’re reminded almost daily about craft brewery growth. Whether it’s anecdotal evidence from our local paper or the hardened fact that we’re on pace for 1.5 breweries to open every day.

But sometimes the success of this sector of the beer industry can surprise you, especially in “emerging markets” for those of us looking in from the outside. All around us, local interest for beer is frothing over and the supply is meeting new demand.

Which led me over the last six months to wonder: what’s up with Ohio?

While you’re certainly likely to find increased craft beer sales just about anywhere – if only for the sake of brewery growth numbers – Ohio has presented an interesting case. In August of last year, craft dollar sales in Ohio supermarkets were almost double the U.S. average (39.9 percent vs. 20.2 percent) and Goose Island (even if it isn’t “craft”) saw sales of its brands increase by 80 percent in 2014. Meanwhile, more “boring” brands like Yuengling saw decreases in sales.

For all of 2014, supermarkets in Columbus specifically saw a surge in craft sales, which constituted a 20 percent share, receiving comparisons to craft-heavy markets like Portland (OR) and San Diego.

“We may not be trendsetters, but we are the force behind trends that last,” said Frank Seta, a buyer at Cincinnati’s Brentwood Spirits and Wine.”I worked with a sales guy that said ‘if you want something to take off, create it San Francisco, LA or New York and make sure they buy it in Ohio.’ ”

The odd thing is, this rise of interest in Ohio isn’t the first for the state. In the days before Prohibition, Cincinnati was considered the “Beer Capital of the World” and Columbus had almost 12 times as many saloons as churches.

“When my book, Ohio Breweries, came out at the end of 2011, there were 49 breweries in Ohio, which included Anheuser-Busch, MillerCoors and Samuel Adams,” said Rick Armon, a reporter with the Akron Beacon Journal who also writes “The Beer Blog” for Ohio.com. “Today, there are well over 100. Every little town in Ohio is getting a brewery now. Heck, there are breweries popping up in villages with populations less than 3,000 people.”

Put in context with growth seen among supermarkets, and there appears to be a population ready for a change in what they drink. Beer-focused bars and bottle shops offer an important, but perhaps sometimes niche, view into consumer behaviors, but it’s the supermarket, the bastion of the average beer customer, where the groundswell of a trend is worth noticing.

Kroger grocery stores, one of the largest food-retail companies in Ohio, saw an increase of about 30 percent in craft beer sales in 2014. That figure applies for 109 stores in the Cincinnati/Dayton area and 123 stores in the Columbus area, which covers Toledo, Columbus, south through Portsmouth, and east through the Ohio Valley, according to Kroger’s Rachael Betzler, public relations manager, and Jackie Siekmann, media and government relations manager.

“In fact, that 30 percent growth number has been consistent for the past five years,” Siekmann added.

Cleveland-based Beverage Distributors, Inc. was up about 20 percent in volume growth to large retail chains like Kroger and 99 percent overall in 2014. Neil Mentzer, Jr., craft/import brand manager for Beverage Distributors, said interest is so high, the company developed a craft-specific sales team to manage craft brands and accounts in Cleveland.

Mentzer noted that nearby (but in Pennsylvania) Rivertowne Brewing was up 95.9 percent in sales for Beverage Distributors for 2014. Like so many states around the country, the growth of of craft in Ohio seems to have been heavily driven by localized and regional options, but bigger craft players are following, too.

In the last two years, breweries like Oskar Blues, New Belgium, Boulevard, Deschutes and SweetWater have entered the market.

If you want a visual of the #craftbeer growth in #cincinnati. 2012 vs 2015 @CincyBeerWeek collaboration beers. pic.twitter.com/oapfBbPt8V

Again, this may sound normal for many locations around the country, but Ohio hasn’t just shown a thirst for the quantity of beer now available, but the state is also putting out high quality brews.

According to BeerGraphs, seven Ohio breweries are ranked in the top-25 breweries according to their Beers Above Replacement rating in the “Mid-Atlantic/Industrial” region, which covers DC, Delaware, Maryland, New Jersey, Ohio and Pennsylvania:

In addition, nine beers are ranked in the top-25 in the region:

… and that doesn’t include the variety of awards Ohio breweries have picked up recently or other research that points toward Ohio and Midwest states as being a new epicenter for high-quality beer.

All this is perhaps buoyed by a greater influx of Millennials, craft beer’s biggest segment, into places like Cleveland and other large Ohio cities.

At a time when craft beer is growing wildly, perhaps it should be no surprise that Ohio is among the states showing the greatest growth, given the its historical connection, increase in breweries and consumer demand. But when beer enthusiasts show a strong West Coast (IPA) bias and find rapid growth on the East Coast, it’s easy to overlook what’s happening elsewhere.

So maybe it’s time to give a second look to our Buckeye Brothers in Beer. What’s brewing with Ohio? Lots. 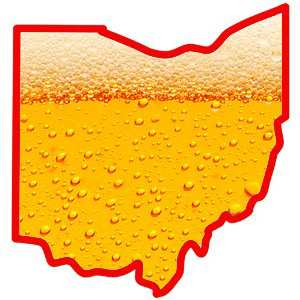 Editor’s note: In a follow-up post, find additional details from my reporting on this piece.

3 thoughts on “Buckeye Beer: Is It Time to Pay More Attention to Ohio?”