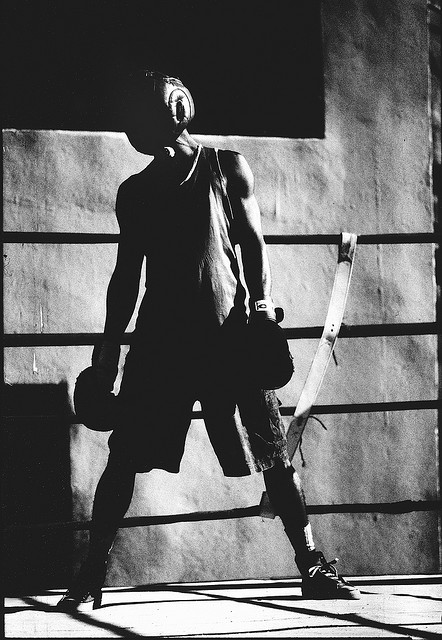 Outside, he’s as pretty as he ever was. Inside, he feels like shit.

The bleeding never stops. Oozing almost daily, it’s an open wound wrapped with gauze and holding back the slow crimson trickle of his innermost weakness.

But eventually, the bandages are soaked through and have to be changed.

His cut man – the one standing between him being a beaten man on the floor and his want to come back for one more round – never leaves his corner. In the ring, the job would be simple: swab, ice, dab, pack, repeat. But now The Fighter’s partner has a much more personal role: open, pour, lubricate, numb.

His cut man has no Name. His cut man has many names: Bud, Johnnie, Jack. Beaten and bleeding, he’d sometimes he’d forget which one to call after stumbling to his partner for help. But then he’d get patched up and move along.

The magic of the cut man is that he is supposed to be able to fix anything. In all his incarnations, he offers novelty and originality – new ways to stop the pain and hold back the bleeding.

The tragedy of the cut man is that his handiwork is temporary. As hard as The Fighter tries, each visit with the cut man is fleeting. He must reenter the ring.

Physically, The Fighter is in fine shape, but inside, where the cut man does his job, he is falling apart. He is alone in his battles, only joined by others in his daily trial of recovery.

His bottle. His glass. His cut man.

As someone who is passionate about something that can be so destructive, sometimes I question my own relationship with alcohol. My adoration for the craft, the people and the product is unquestioned personally, but there is always an inkling of self-doubt.

I fight with the threat of forgetting my place, of letting an emotional connection become a physical one. I have succeeded, but it is a battle of both memory and foresight. Others have fallen. I cannot.

This post is a part of The Session, a monthly collaborative blogging effort with beer writers from around the world.

Beer isn’t always sunshine and rainbows. This month’s topic comes from Hipster Brewfus, who asked participants to join him in Beer Fight Club in order to share thoughts on beer and why it isn’t always happy-go-lucky.

7 thoughts on “The Fighter”