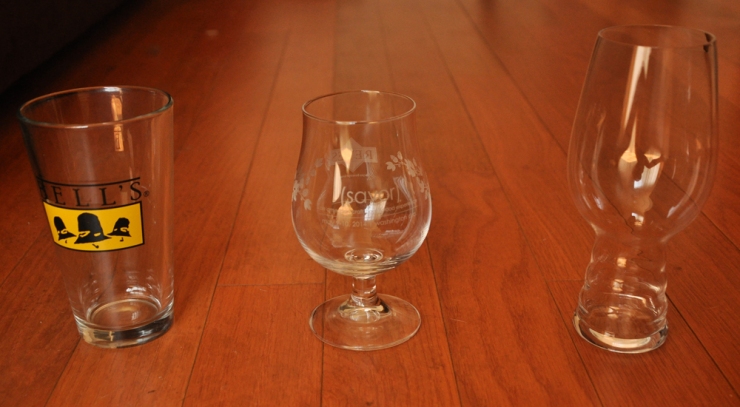 Behind the curtain, beyond the bottle, I’m just a guy spending my free time writing about beer. Nothing terribly special, but as passion projects go, it’s OK by me.

Every now and then, I’m lucky to interact with others, whether they be fellow beer enthusiasts or people simply curious about my research and writing.

This week, I’ve been able to share my love for beer in a couple new ways.

In what sometimes seems like another life, I was a newspaperman. A slave to deadlines, bound to my desk by reporter’s notebooks and the never-ending need to make another call to another source for another story.

So I have a soft spot in my heart for print publications.

I was recently contacted by an editor at “electric city,” a weekly newspaper in Scranton, Penn., about using a photo I’ve run on my blog. The image is one of my favorites: Ithaca Beer’s Apricot Wheat set amongst a backdrop of tall, waving grass: 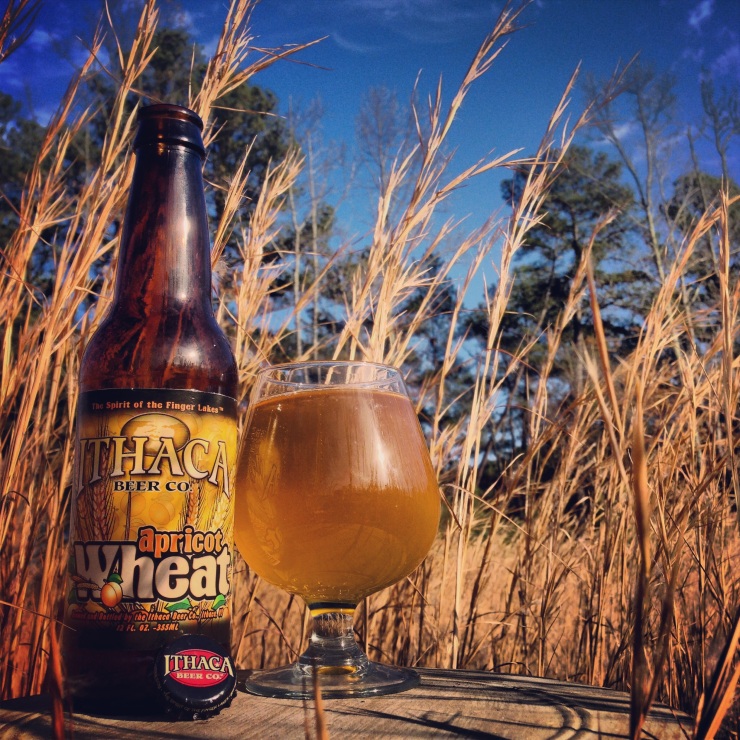 The newspaper used my photo in a weekly beer review column and is my first officially published beertography: 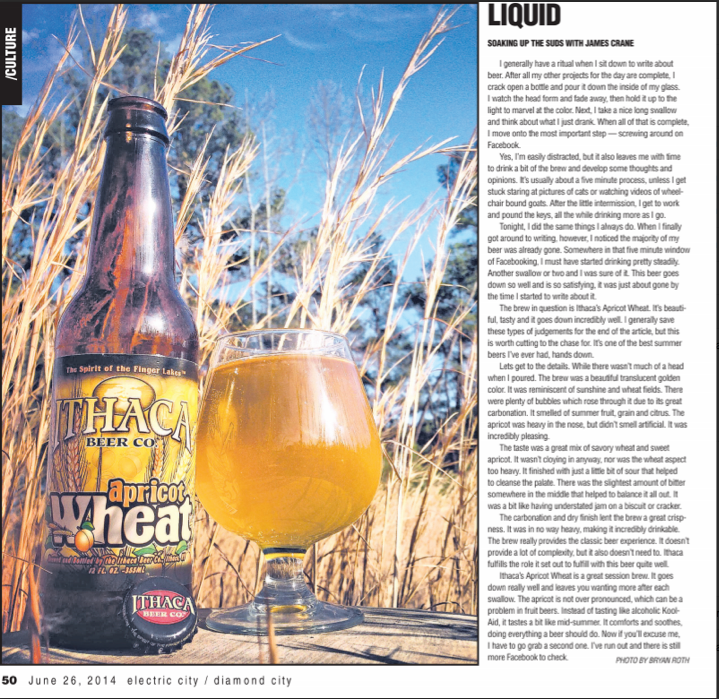 I’ve known Sean Creel virtually for a while and have admired not just his love for beer, but the lengths he’ll go to chase it. Sean is a co-founder of BrewKeep and all-around good guy. He recently left a corporate job to start a beer journey into the industry he loves, but he’s also curious about the journeys of those like him.

I got the chance to chat with Sean on BrewKeep Radio, sharing a little of my own beer journey while talking about something that’s grown near-and-dear to my heart: glassware.

In the recording, we do a taste test with Boulevard’s Double-Wide IPA to put the usefulness of proper glassware to the test. It ended being a rather in-depth experiment testing the drinking direct from a bottle, a pint glass, snifter and a Spiegelau IPA glass.

It was a lot of fun geeking out with Sean and if you’re curious about the impact of glassware, give it a listen:

You can find more podcasts from Sean on the BrewKeep site.

A final note on glassware, again…

In Sean’s podcast, I mention my annexation of a cupboard shelf for my glassware. I fear it should be more well-worn than it is now with the constant shifting of glasses on and off the space: 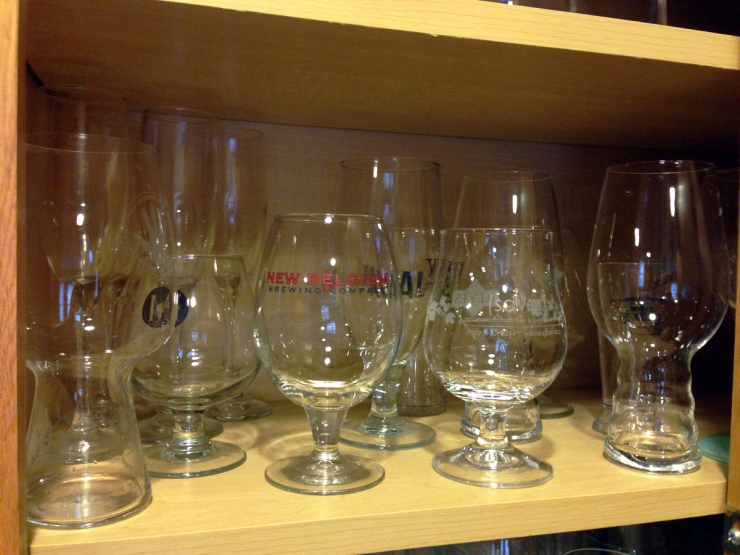 If you didn’t catch my last post on the importance of glassware, here’s one more experiment that may pique your interest.

I had one leftover bottle of RJ Rockers Black Perle IPA – stylistically a black IPA, but in taste, more of a stout with an overdose of hops. With a newly acquired Spiegelau stout glass, I halved the beer between the Spiegelau IPA glass and its stout counterpart. 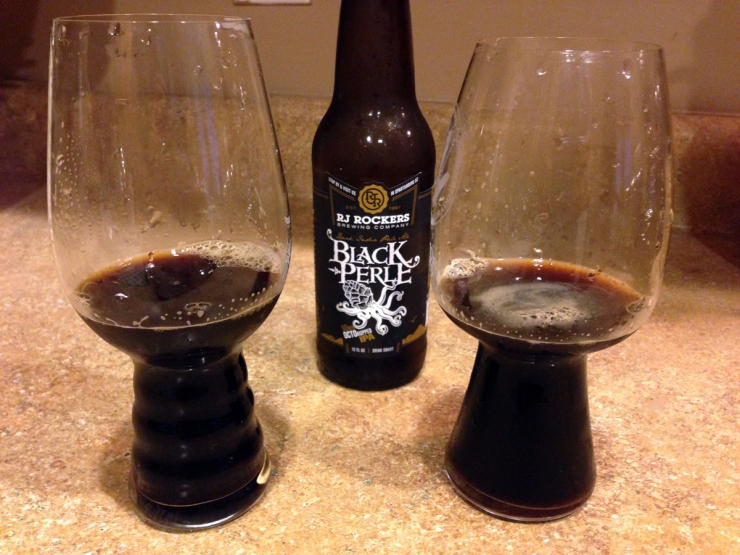 If you give Sean’s podcast a listen, you’ll get some great examples of the differences between drinking from bottle to pint glass to snifter to specialty IPA glass. One experience is better than the next. In the case of Black Perle, both glasses offered something new.

With the IPA glass, hop aromas were just a little pungent, even if this bottle has been sitting in my fridge for months. This glass is geared toward maximizing the smell of a beer and it does just that – pine and “cool” mint on top of roasted coffee from the malt.

The stout glass, meanwhile, is meant to not just enhance the aroma in a similar way, but will actually manipulate the mouthfeel. Beer from the IPA glass might “feel” as it would out of the bottle. From the stout glass, it’s like any full-bodied brew can become almost as creamy as something from a cask or nitro tap. The shape of the glass and surface area alters the way the liquid comes out of the glass and onto your tongue, turning your sips into thicker waves of brew.

All this is to say I’m happy to be an ambassador for these glasses. As I mentioned to Sean, using proper glassware better allows us to enjoy a beer to its full potential, just as the brewers would want.

If you’re interested to take the plunge, both the IPA glass and stout glass can be had on Amazon for $20 for a set of two.