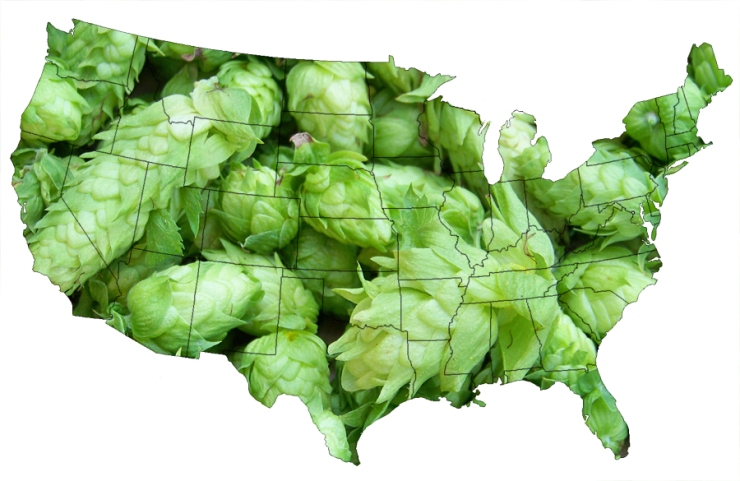 Today in America, a brewer began crafting a new recipe that will be enjoyed by millions.

A distributor took a truck full of beer to bottle shops, bars and restaurants.

A beer lover stood in line for hours, waiting for the chance to buy some rarity that will add a notch on their belt few others can claim.

Today, as we sit here and reflect on the bounty of choices we have when it comes to our beer, one thing is clear: the passion of Americans drive this industry and right now and that passion is all about hops.

Here are the results of that passion: India pale ales continue to lead all craft beer styles in growth year to year, 60 percent of Harpoon’s sales are of IPA … outdone by Dogfish Head’s 60 and 90 Minute IPAs, which make up 68 percent of that company’s sales. Sierra Nevada’s Torpedo, the best-selling IPA in the country, saw sales growth of 25 percent last year, bringing in $42.8 million for the company. This doesn’t even count the release of Founders’ All Day (session) IPA, which became the brewery’s best-selling brand three months after its debut and grew 569 percent in 2013. By the end of this year, All Day will account for 35 percent of Founders’ production.

That’s why I believe 2014 will be yet another breakthrough year for the style. After five years of voting Pliny the Elder as the best beer in America – despite the fact it’s only shipped to a few West Coast states – it’s clear the mythical status of that IPA and its hoppy brothers is enough to make you go crazy for anything that includes those three letters.

Voting begins soon to determine 2014’s “best beer,” and I have no doubt you’ll show your grit and determination again, anointing Pliny as the best beer you think exists, even though that brewer down the street is working hard on something just like it.

The question for everyone popping open a bottle, seemingly running through every beer drinking decision we will make this year, is whether we are going to drink something different. But how can we achieve that when IPAs line shelving and tap walls like never before?

For several years now, beer lovers have been consumed by a never-ending search for the Next Great IPA. It’s an important search – one that dates back to the 18th century. But when our obsession with hops prevents us from trying other beers full of nuance and subtlety, when our typical preferences shut down the potential for enjoying another kind of beer, we are not doing right by our innovative brewers who have skills that surpass the process of dumping pounds of hops into a beer.

Just look at our online discussions. Not only are they focused on finding one IPA to Rule Them All, but our comments and engagement goes on and on with what we believe to be the best India pale ale. Why are there so many to choose from? Because every brewery has to make one these days.

Toward the close of last year, the highest-gaining “bottle” brands at bars, clubs and restaurants were Angry Orchard, Redds Apple Ale, Dos Equis and Lagunitas IPA. That says a lot. It tells us that a brewery doesn’t need a barrage of advertising to reach national recognition, as long as focusing on quality. It may also tell us that having “IPA” slapped across a label doesn’t hurt, either.

My fellow Americans, succeeding in the beer business isn’t easy. Crafting something unique and so universally loved has never been easy. Sometimes brewers stumble, make mistakes and get frustrated or discouraged.

But the beer we want for our kids – when they grow up to be 21, of course – is turning out to be one kind of style, where honest work simply consists of adding more hops. Prosperity for all beer should be widely shared. Opportunity for all styles lets us go as far as our taste buds will take us.

Let’s work together, knowing that a new kind of beer that we’re certain to enjoy is within our reach.

18 thoughts on “The United States of Hopiness: A State of the IPA”