Thanks for joining this week-long series. Get caught up with part one and part two.

Throughout this week, I’ve been working on an on-going conversation that leads up to today’s post, a response to October’s “Session” question about the craft beer bubble.

Part one looked at the idea of saturation and what that means, especially from a local standpoint. Part two discussed the idea of investing in craft beer and how lower costs makes it easier than ever.

Today? Let’s try our best to see where we stand with this whole “bubble” thing. As a refresher, here’s our question to try and answer, via Derek from It’s Not Just the Alcohol Talking:

Many in the industry are starting to wonder when, and more importantly how, the growth is going to stop. Is craft beer going to reach equilibrium and stabilize, or is the bubble just going to keep growing until it bursts?

I’ve said all along that I believe a bubble exists, although I suppose you could say that about any fast-growing good or service. The most important part to Derek’s question, however, is where we stand in relation to the build up of the craft beer bubble.

How Inflated is Our Bubble?

Let’s play off this handy chart, showcasing various stages of an economic bubble: 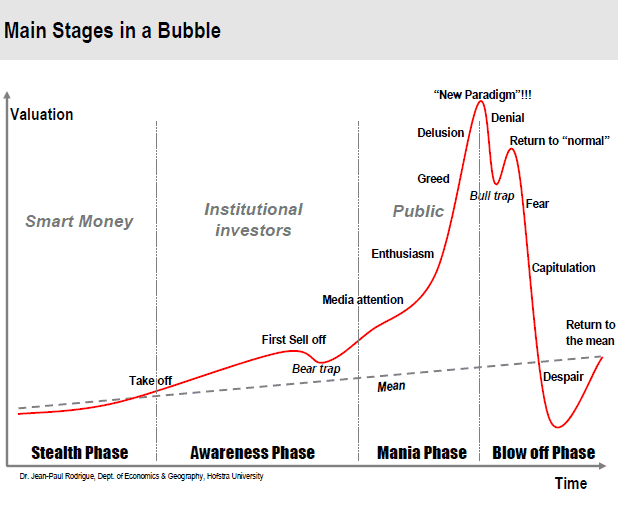 I believe a clear argument can be made that we’re in the “Mania Phase” of the build-up. There is more than enough media attention for beer, let alone the beer bubble, and enthusiasm is very much alive and well.

Now the question becomes how long until we hit problem areas of this chart?

I’m not sure if we’re in the “greed” stage yet, although I could point to the Yucaipa Companies, a private equity and venture capital firm specializing in turnaround investments, and their $100 million investment in the Brew Hub.

Of course, that’s not the only venture capital entering the craft beer marketplace: London’s Oakfield Capital Partners put more than $1.5 million into Freedom Brewery, a British craft lager company and Boston’s Fireman Capital has invested in the Utah Brewers Cooperative.

Why are they getting involved?

The reason is twofold: Craft beer sales are growing while the overall industry is basically flat which, in turn, means that larger beer makers are looking for growth by acquiring microbreweries, giving private equity investors an easy exit strategy.

The emphasis there is mine. Venture capitalists don’t buy in unless there’s money to be made, after all. “Exit strategy” here is the selling craft breweries to the Big Boys like SABMiller or AB InBev, who are actively trying to grow their “craft” brands. If we’re at the stage where private equity firms get involved in buying and selling shares of craft breweries, I feel we’re at least at a point to discuss the idea of the “greed” stage. (Or just sound business practice to make money, depending on your POV)

But perhaps this is all besides the point. Yes, I believe we’re in a bubble, but as {V} points out in the comments of my post on the craft bubble and saturation, it’s hard to know what that exactly means because of the historic nature of it all. We’re not really sure what our limit is, but we know interest and spending are going up and staying up. We also know that it’s easier than ever to enter the marketplace.

So to get to Derek’s question, it seems clear that if the bubble “bursts,” there wont’ be some massive crash. More likely, there will be some small-scale failure and there will be some consolidation, but we also have to remember that recessions in an industry are a normal part of the market economy. It’s all about regulating excess, if necessary.

We know that saturation is probably more dependent on local conditions and we know new breweries need to utilize their local market as a strength. We also know that more people are getting involved than ever, thanks to lowering costs to play. So what does it all mean?

I guess we’ll have to wait and find out.

13 thoughts on “Fill’er Up: An Open Discussion on the Craft Beer Bubble (Part 3)”