Today we’ll continue our look into the growth of how the term “craft beer” became part of national interest. Here are previous posts on the topic for review of refresher:

This effort is based on research that showed the term “craft beer” grew steadily in searches through Google beginning in 2009. Simply put, I want to know why. In part one of this latest series, I came to the conclusion that the growth of breweries around 2009, both in number and sales volume, helped drive awareness, especially in the Northeast. Additionally, it seems that the growth of curiosity in searching for “craft beer” may be an organic one.

Why is that? Let’s see what we can find…

It goes to say that if someone is holding a craft beer in their hand, they may be better equipped to recognize it as such. But if we can infer that sales drove interest of the term “craft beer,” what were the breweries themselves doing about it?

One of the top news stories of 2009 – the year “craft beer” began exploding on Google – was the release of Beer Wars, a documentary highlighting the struggle for independent brewers who compete with Big Beer. I reached out to director Anat Baron to see if she noticed any change in terminology when she started the film in 2005 and here’s what she said:

Everyone I interviewed from big to small brewers were calling it craft beer. I used that term since that’s what they used and it’s really their story. The media had very little interest in beer in general and craft beer specifically until around 2011 when the craft beer/mainstream media love affair began. When the film was released in 2009, most morning shows/talk shows were dismissive of the subject as too low brow.

There’s the answer to “who” was saying “craft beer” – the brewers and businesses themselves, as expected. But if these people were using the term in 2005, why did it take several more years for people to catch on?

Part of it may simply have to do with market saturation. Craft beer was below 3 percent of the U.S. beer market by volume until 2006 and then started making jumps: 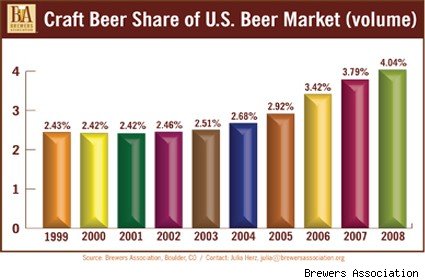 But if it was brewers who were saying “craft beer,” how did it get to consumers? Sheer number of breweries might help. As we know from the recent explosion of craft beer, localized businesses are helping to drive growth. New breweries aren’t opening with regional or national sales in mind, they’re focusing on local customers. So when we see a chart like this spiking upward in 2009, we get a sense that interactions and awareness of beer should increase:

Again, if it’s an organic transition for people to call their beer “craft” in 2009 – before the media “love affair” Anat mentions – then it hints at the likelihood people were taking their cues from businesses and each other. It also further explains why the Northeast picked that phrase up so quickly, considering the strength of growth in that region of the country and adoption of craft beer.

I also contacted Julie Weeks, marketing communications manager with Boulevard Brewing Company. I wanted to know how their company – now one of the premiere breweries of the East Coast – handled their marketing:

Based on early press releases, we just defined ourselves as a local brewery. In the late 90s/early 2000s, we said we were the largest specialty brewer in the Midwest, and if I recall, that was based on the definitions of breweries at the time from the [Brewers Association] … We still refer to us as the largest specialty brewer in the Midwest in some of our material, however we’ve also referred to ourselves for many years as a regional craft brewery, based on the [Brewers Association] definition.

In addition to Boulevard’s efforts to define themselves as a “craft beer” producer, Boston Beer Company, maker of Sam Adams, was also an early adopter. According to Boston Beer’s press release archive, their first mention of the word “craft” appears in a March 9, 2005 release in which they describe their company as “America’s leading brewer of hand-crafted, full- flavored beer.” Then on Nov. 2, 2005, Boston Beer takes the full plunge [emphasis mine]:

Jim Koch, Chairman and Founder of the Company, commented, “We are very pleased by the almost 9% depletion growth achieved in the third quarter, which resulted in almost 5% growth for the first nine months as compared to the first nine months of 2004. The craft beer category has grown this year, despite price increases, while the beer industry as a whole has been relatively flat. We believe that the brand communication that we introduced in March 2005 has better positioned Samuel Adams to benefit from this category trend.”

Using “craft beer” became ubiquitous for both Boston Beer and Sam Adams by 2007. For what it’s worth, MillerCoors, owner of Leinenkugel Brewing, began using a standard tagging/signature with “craft beer” in their press releases in 2009, referring to the Wisconsin-based brand.

Again, we come back to the idea that breweries drove this change, which further explains the regionalism of saying “craft beer” early on in the movement.

But if it wasn’t mass media that was prompting this change in vernacular – as Anat pointed out – how did the idea of calling non-macro beer “craft beer” spread so quickly from the Northeast to other parts of the country?

… we’ll try to answer that question in the next part of this series.