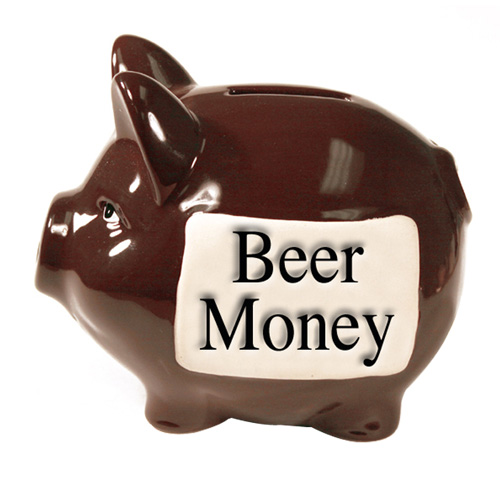 My wife loves to shop. Shoes, dresses, pants … she loves upgrading and enhancing her wardrobe.

We both have plenty of clothing and will gladly replace items when necessary, but her side of the closet takes up much more space than mine and it’s always growing. For this, I tease her.

“Aren’t you?” she recently replied, as I sipped on a beer.

You know what? She’s kind of got a point. Whereas she’ll buy shoes or dresses or pants, at least she reuses these items, effectively depreciating the cost/value of her clothing over time.

So I began to wonder: is part of the enamor of being a beer nerd an attempt to capture fleeting (and sometimes costly) experiences? In the world of this expensive hobby, what makes it worth it? The beer, sure, and people, too. But what about the money?

The reality of the situation is that while I’ve spent more money on beer than I’d want to count, it’s only going to get worse. (or better, depending on your point of view)

At my local bottle shop, I’ve noticed prices edging up slowly in the last six months. A six-pack of local, North Carolina beer has increased between 50 cents to $1.50 during that timespan. I used to be able to spend $8 on NC beer. Now the starting point is typically $9 or $9.50.

There are TONS of factors involved in this thanks to brewery growth, expanding staff or even our three-tiered system. But, as Brewers Association Craft Beer Program Director Julia Herz recently spelled out, craft beer lovers can expect to pay more from now on. (skip to 2:17 for these comments)

Maria Bartiromo: Are prices moving up as a result of this popularity?

Julia Herz: Prices will ebb and flow, certainly, and continue to inch up. We’re dealing with not a commodity, there’s agricultural products involved. So with that, you’ve got a challenge on the pricing side, for sure.

MB: Agricultural prices have gone up. So that is passed onto the consumer.

JH: Yeah, it is. And taxes. I mean, you know, small brewers pay a disproportional amount of taxes compared to comparable industries, too. About 40 percent of the cost of beer, by the way, is taxes. Because you have federal excise taxes on beer. It’s a whole different ball game for these small brewers to compete and thrive and they’re still thriving – double digits. Fifteen percent by volume growth in 2012 alone. Year after year double digits despite the challenges that they’re up against.

As with any product, prices can change. Thankfully, in spite of rising bottle shop prices, I haven’t noticed large shifts in prices at bars on draft beer.

I was also happy to find this week the latest column by Chad Lothian (aka @Chaddah) at If My Coaster Could Talk:

I drink craft beer because I appreciate the quality, the diversity in style and flavor. … This blog post is intended to give you some ideas on how to save some money or help stretch your money so that you can experience more beers for the same amount.

His post, Craft Beer on a Budget, offers several ways to manage your money and your hobby, including brewery visits, bottle shop tastings, half pours and more. It’s good, common sense that may not be obvious to all.

But the real question is: will my behavior change? I don’t know.

Among the many things I hope to do in coming months is get a better sense of my finances. Not because my wife and I are having a tough time, but because I’ve drifted by with simply checking account balances and keeping tallies in my head. I’ll be interested to find out what my monthly beer budget is and how it should change.

Or, I can just ask The Missus to stop buying all those shoes and dresses and pants. More beer for me.

What do you think? Have you noticed changes in beer prices near you?