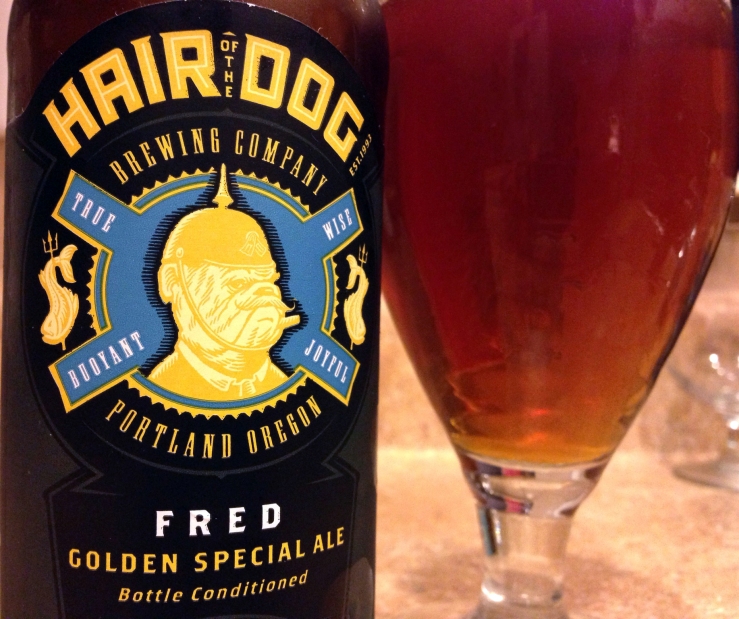 West Coast beers have always been mysteriously aloof to me. Aside from being thousands of miles away, local/regional loyalties and distribution boundaries make the best of the best seem more like a Holy Grail (Pliny!) than Real Live Beer.

So it’s nice when that wall comes tumbling down from time-to-time. Like when I got to meet Fred from Oregon’s Hair of the Dog Brewing Company. It (he?) has a 92 on Beer Advocate. It’s a beer in honor of beer writer, historian and general Man About Town Fred Eckhardt. For some reason Fred is also a dog wearing a World War I-style helmet.

Categorized as an “American strong ale,” Fred sits somewhere between the profile of an amber and barleywine beer. The smell is off-the-charts with loads of sweetness. Freshly made caramel and table sugar are easily detectable, but toffee and marshmallow aromas supply plenty of depth.

For some reason there was a faint smell of carrot to me. That never had much of a chance against all the biscuity sweetness of this beer which was amplified by the “aromatic and rye malts” used in the brew process, according to the label.

Oddly enough, the use of 10 different hop varieties doesn’t register in the beer’s smell, but is easily found in the taste. It’s impossible to miss the sweetness of the malt on each sip, but there is a solid hop bitterness and bite at the end of each taste. The hops provide some pineapple and peach notes, but I was mostly struck by an impression of honey and green apple.

It’s easy to tell there is yeast everywhere in this bottle-conditioned beer, but instead of being overbearing with esters, the strain used in Fred only complements the malt. At 10 percent ABV, booze is always hiding, peeking out every so often on the aroma or flavor, but it never comes close to punching you like a barleywine would.