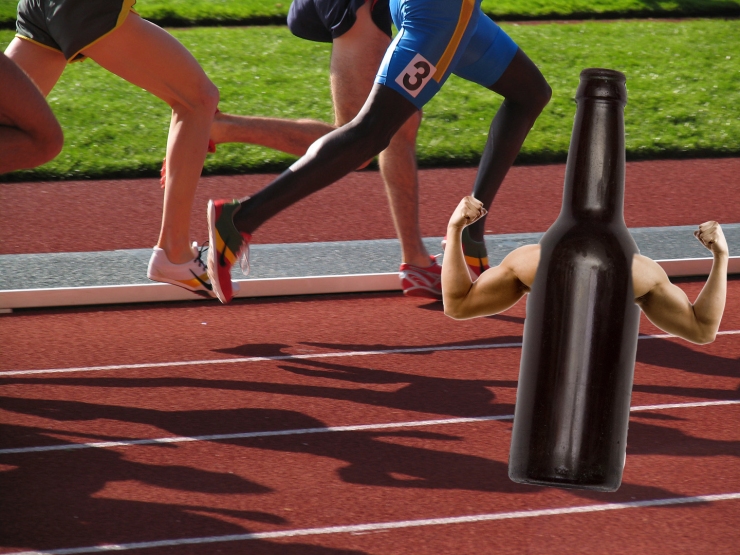 I was a runner long before I was a beer drinker, let alone a beer enthusiast. If, for whatever reason, I can no longer indulge in beer, I will be a runner long after I’ve given up the hoppy pleasantries of craft beer.

The more I look around me, the more I’m finding people in that same vein. Perhaps it was just never mainstream. Perhaps runners (or bicyclists, swimmers and even weight room champions) have always been beer people. Perhaps it’s just easier than ever to find out there are so many that are one in the same.

On Twitter, you’ll find people like @ActiveBeerGeek or @TheBeerRunner or @WinBassett, steward for all things North Carolina beer who tweets plenty about fitness alongside his insights into the world of beer. It’s an ever-growing community – maybe a community that has always been there but is now really starting to strut its stuff thanks to social media.

As the evolution of craft beer has really taken off in recent years, so too has the image of the stereotypical beer drinker. It’s no longer some guy in a trucker hat with a big gut swilling cans of Bud. It’s not just tailgating at The Big Game. We’re people of all sizes (and gender) who can easily be found on bikes, trails and in the gym.

While it may not seem obvious, exercise and beer go hand-in-hand. After all, both exercise and enjoying beer ultimately have to do with commitment and control of our health. Exercise gives us a means to feel good and stay healthy. The same can be said for beer, as Michael Lamardo points out:

It is the belief in a lifestyle that constitutes a keen awareness of the physical well-being of one’s body, while also appreciating the Earthly nectar that has provided centuries of personal cheer and social mobility.

After all, exercise isn’t the only thing that benefits your health. Responsibly drinking beer can help strengthen your bones, improve your heart and even reduce your risk of cancer. Plus, there’s nothing like carbo-loading with a beer or two for the next day’s workout. (I kid. Sort of.)

Exercise and beer? Like peanut butter and jelly, I tell you.

Not to be outdone, there might just be some worthwhile attributes to pouring a pint after that workout, too. You never need to look far for some kind of beer-related race – typically running – whether it’s the Dogfish Dash, Will Run for Beer series of New England or the Boilermaker of upstate New York founded and sponsored by Saranac.

Surely, people with active lifestyles have always enjoyed beer, but perhaps it’s the recent explosion of craft beer that gives people more reason to get together and enjoy it all. You aren’t taking part in one to take part in the other – I don’t go run a few miles just so I can drink a beer. Maybe it comes back to one of the aspects of beer that I’ve written about often. Maybe whether it’s exercise or beer or anything else, it helps us find a place. It helps us find community.

16 thoughts on “Let’s Get Physical, Physical: A Few Words on … Exercise and Beer”