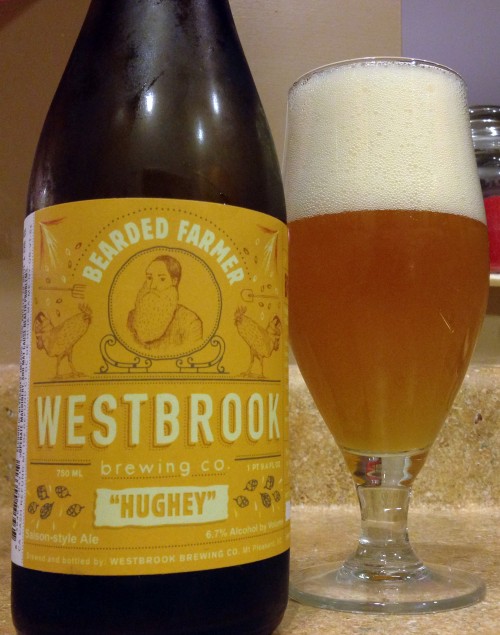 Round 2 of my brief introduction to Westbrook Brewing, courtesy of Nick at Drink. Blog. Repeat., is in the books.

Friends, this is one brewery to watch out for.

While Nick has sung the praises of Westbrook for some time, what’s attracted me most to their beer has been a commitment to experimentation while still a young company. Reminds me a lot of Fullsteam, one of my favorite brewery options in the Triangle.

My latest go-around with Westbrook was with Hughey, the first entry into Westbrook’s Bearded Farmer Saison Series. Based on the beard featured on the label, this had to be impressive.

Fittingly, everything about this beer screams farmhouse in the best possible way. From it’s hazy, golden wheat color right down to a solid but not overbearing barnhouse funk. Brewed with a combo of Belgian and French yeast strains, including three types of Brettanomyces, there is so much going on in this beer some might get confused. It took me the full 750 mL bottle to get a proper grasp.

With my first glass, I could easily smell the funkiness of the Brett and touches of sweetness I likened to orange blossom honey. There was even a biscuity, sweet roll aroma slowly wafting out. I could definitely sense a peppery bite, but in no way was it spicy. Rather, it offered a kind of earthy pleasantness without the snap you might find from sticking your nose in a bottle of unground peppercorns.

Because this beer was bottle conditioned (per good saison standards) and I didn’t pour out the whole bottle in one swoop, all these characteristics evolved rapidly from glass-to-glass. While the first glass offered an array of aromas, by the time I was finishing my third, the Brettanomyces had really taken over. Westbrook didn’t skimp on yeast in the fermentation and as you can see with the picture below, there was lots of sediment left on the bottom. The catch? That was the amount of yeast left after I rinsed the bottle three times.

Without turning this into a book, here’s the short of the flavor profile:

Like any good farmhouse/saison, there was a wonderful tingle on each sip, but it wasn’t overcarbonated. A banana/strawberry mix lent itself to something rather sweet at the end – pineapple? – creating flavors more akin to a tropical smoothie. Each sip offered a dry finish of white grapes and a lingering Brett-induced funk on the back of my tongue. That became even more present on the second and third glasses as more yeast snuck into my pours.

The final sips were as smooth and sweet as a piece of fresh-basked buttered bread. Wonderful.