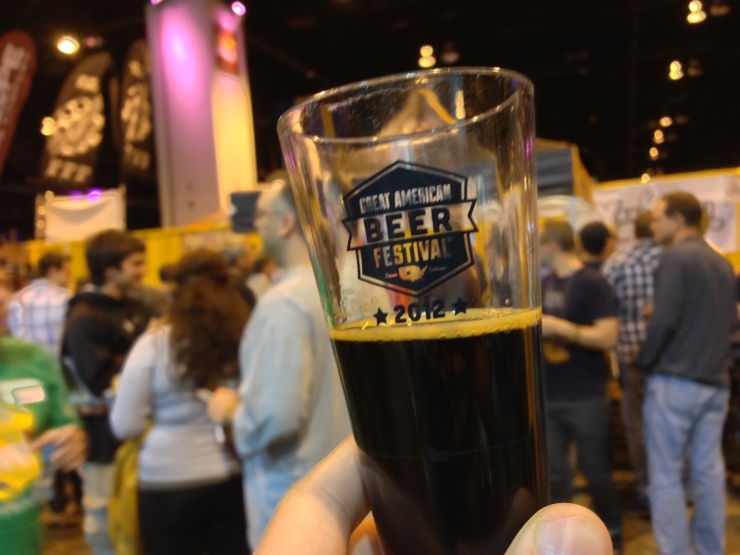 So … day/night #1 of the Great American Beer Festival is in the books and it was a hell of an experience. Beer as far as the eye can see and lots of great conversations with brewers, brewery employees and beer fans alike.

Interested in a quick and dirty rundown of my inaugural visit and thoughts on a slew of beers? Hit the jump to see which beer kicked my ass the most and the biggest surprise of the night.

Overall, the pace of the festival was pretty good. I was able to easily move from one brewery booth to the next and try tons of samples. However, I was sadly surprised that I had  no wait for all the great North Carolina breweries I love as well as New Glarus and Goose Island. Very bizarre, given the quality, variety and reputation. I really didn’t expect that for New Glarus, but all the better for me.

On the flip side, this was the line for Cigar City. Because I wanted a short break, I went to the back. It took about three minutes to get a pour of Jai Alai IPA:

Speaking of which, here are super-basic notes I took on what I thought was noteworthy (in order of tasting throughout the night)….

The brewery was showcasing this year’s Longshot series winners. I chatted with the homebrewers who were all nice guys. They served:

Strawberry lager – straight, very clear lager that was fermented in the secondary with three pounds of strawberries for about five gallons of brew. It tasted like candy and will be a hit with The Ladies when released. Perfect summer beer with very strong strawberry aroma and taste.

Beerflower Wheat – a wheat beer brewed with hibiscus flowers – apparently not a new trend – which was also light in body and smooth on taste. You could definitely taste the earthy characteristics of the flower.

Smoked porter – it’s everything I’ve read about. It’s the smell of Alaska – wonderful smokiness and I swear I could smell salmon. Maybe a whiff was just that powerful on my memories. It was surprisingly light for a porter with a little hint of chocolate.

Jai Alai IPA – The smell was amazing with papaya, grapefruit and just about any citrus characteristic you can think of. I even thought I got some banana sweetness. Really good.

Jalapeno lena – I make no joke when I use the pun that this was a five alarm fire in beer form. The brewer told me they use three pounds of full peppers – flesh, seeds, everything – per barrel, which is about 30 gallons, if my searches are correct. Unlike my jalapeno blonde, which removed almost all seeds and flesh to avoid the stinging heat, this beer was like hot sauce on my nose and tongue. Very intense and one ounce was definitely enough.

Wet hop rye – I swear I smelled fruity gum and it tasted like pineapple, strawberries and bubble gum. Almost sugary sweet, which was strange for this brew made with Cascade and Nugget hops. I have no idea why this occurred, if it’s supposed to end up that way or was just the mix of beer flavors from everything else. Wonderful beer, all the same.

Hot Thoup – This pale ale was heated to what I assumed might’ve been 60-70 degrees and then dispensed through a Randall containing carrots, cilantro and ginger. Like the name, this tasted like an alcoholic cold remedy. Approved by moms nowhere.

Gingerbread dream – The smell and taste of this beer couldn’t have differentiated more. It had aromas of light bourbon like their bourbon county stout but like the name, tasted like a cookie. Freshly baked oats mixed with vanilla and nutmeg danced on my tongue. This would be a perfect winter beer to have by a fire.

Choc Chili – Some mole smell with great roasted grain on the front. Intense pepper flavor on the back end.

Saison Poivre – This is a gluten-free brew made with apples. If you’ve had gluten-free beer before then you’d have an idea of what this is like – very clear on appearance, light in body and sugary sweet. Lots of apple on the first sip, but I got almost no pleasant yeast esters.

Imperial Balinese stout and pumpkin beer – I’m putting these two together because if there’s one thing I learned from tasting a few of TAPS brews is that they don’t know how to say no. That’s certainly a good or bad thing, depending on palate. The stout is the most intense coffee stout I’ve ever had. You could wake up with it the aroma and flavor are so incredible. Like straight espresso. The pumpkin beer was highlighted by what tasted like packets of cinnamon and nutmeg in my one-ounce pour. Being a huge pumpkin fan, I didn’t necessarily mind this, but it was most definitely unique. If heavy flavors are what you’re seeking, this Brea, California-based brewpub is the way to go.