It has been a typical summer here in the Triangle – hot, humid and sweaty. Oh so sweaty.

But on a recent weekend it was hot, humid and rainy, so it was perfect weather to break out a cold-weather beer! (I have to find some reason). I’ve had Epic Brewing’s Big Bad Baptist (Batch 5) sitting in my pantry for almost a year, waiting for an excuse to open it up. There never was an ideal NFL Sunday, so why not in August when it’s overcast and raining all day? Works for me.

This beer is part of Epic’s Exponential Series, which seems a fitting descriptor for this beer. I really liked it and it’s got a 92 on Beer Advocate. For good measure, I ate it with a homemade brownie.

As you’d imagine, the beer poured midnight black with just a trace of brown head that quickly disappeared. That was OK, though, because Big Bad Baptist still had plenty of strong aromas that wafted out of the glass. In order, it was very easy to pick up coffee, booze and chocolate. At 11.2 percent ABV, makes sense, I suppose. But on a second whiff, I got great roasted notes with lots of chocolate – a sign of the Rimini coffee and cocoa nibs used on this beer. On a third smell, almonds. If I had to pick a sequence of characteristics for a big honking stout like this, I wouldn’t deviate far from what Epic has created.

Lucky for me, eating the brownie with the beer helped to emphasize all the secondary characteristics of the taste. Lots of coffee and nut came through, with the high ABV hiding as best as it could. While it could certainly be more obvious to others, the whiskey from barrel aging didn’t have as much of a punch as I thought it would. Kudos to all the other flavors for not letting it take over. Until the beer had sat out for about an hour, it was still rather hard to notice. The mouthfeel was smooth and thin which may have helped give a boost to the alcohol once I started to really notice it.

Hit the jump for my “Rate That Beer” sheet. 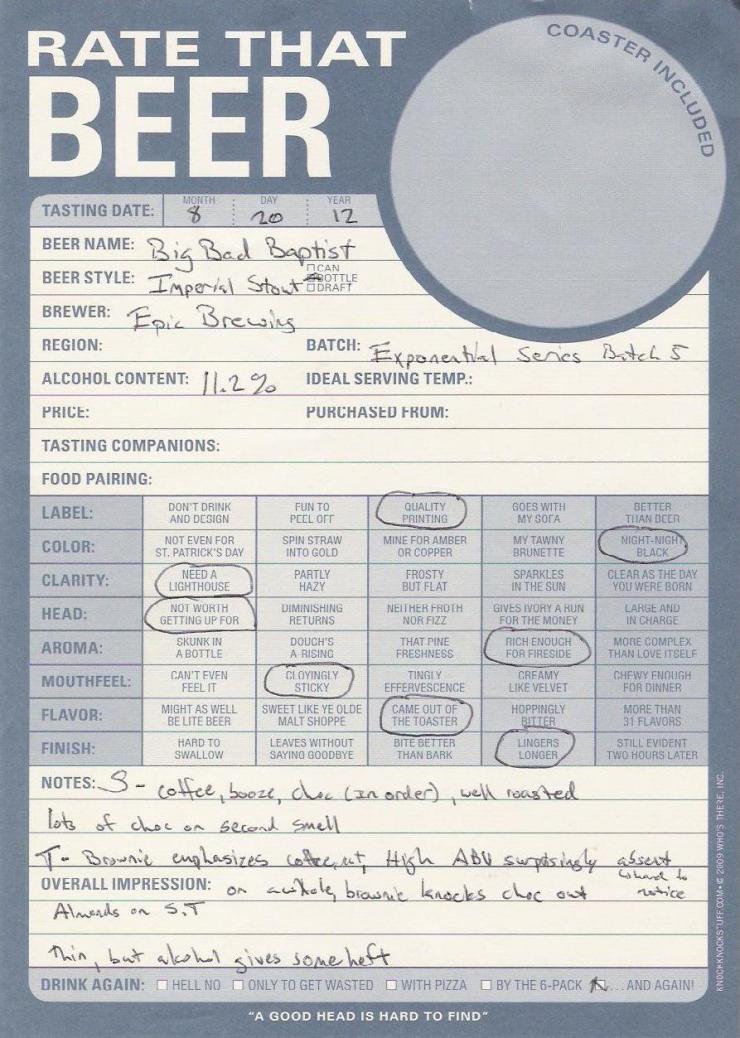